As of November 2022, Nigeria had nine companies with a market value of at least $1 billion USD.

In the world of valuation, a unicorn is any company valued at more than one billion US dollars. This is also because they are difficult to come by, particularly in the startup industry.

Nigeria does have privately held unicorn companies, but private investors rather than the market determine their valuations. We must use a different metric for companies that are publicly traded.

The valuation on market value of quoted companies per Nairalytics is based in Nigeria but is listed on any global stock exchange. We don’t use venture capital or private equity-based valuation.

Every company, with the exception of one, is listed on the Nigerian Exchange, and none is valued at more than $1 billion and listed on a stock exchange outside of Nigeria.

The companies are also significantly owned by Nigerians.

The All Share Index for the Nigerian Equities Market reported a total market capitalization (or value) of about N25.9 trillion ($58.3 billion) at the end of November.

Many stocks had a good month as they reported a net monthly gain of about 8.72%, which is a significant change from the 10.58% reported in the month of October 2022.

A number of Nigeria’s most valuable equities (MVE), such as manufacturing firms, telcos, banks, etc., saw gains during the month.

Nigerian businesses worth over $1 billion USD were the main factor in the valuation growth.

What the data is showing: Based on the official exchange rate of (N445/$1), the top ten MVEs in Nigeria had a combined market value of N21.1 trillion, which is equal to $47.5 billion.

Five of them have a market value of over a trillion dollars.

When a company surpasses unicorn status, which denotes a value of over $1 billion, it is frequently praised.

Only one company on our list is worth less than one billion dollars, according to our data and the official exchange rate.

For another month, Airtel was the most valuable company in Nigeria, with a valuation of N5.4 trillion ($12.2 billion).

In November alone, Airtel increased its value by 13.7%, making a significant contribution to the gains made by the top 10.

Dangote Cement, which is mostly owned by Aliko Dangote, the richest man in Africa, comes in second at N4.46 trillion ($10.04 billion). In November, the stock increased by 19%.

Market capitalization for MTN Nigeria at the end of the month was N4.44 trillion, or $9.9 billion. This month, it also showed an 11% gain.

As a result of their valuation falling below one trillion naira, Nestle is no longer included in the SWOOT list.

Nestle and Seplat are each worth $1.7 billion and $1.3 billion in dollars, respectively.

Other: The top ten largest companies by market capitalization include Zenith Bank, GTB, and FBNH.

Only Zenith and GTB, with respective market values of $1.5 billion and $1.3 billion, are worth more than $1 billion.

At the end of the month, all three banks reported gains, which increased their market value.

Nigeria Breweries, Stanbic IBTC, and Geregu Power Plc, for example, have respective market values of $731 million, $775 million, and $889 million. In the upcoming months, keep an eye on these businesses.

Jumia, a Nigerian business that is listed on the New York Stock Exchange, is worth $457 million.

See the chart below; 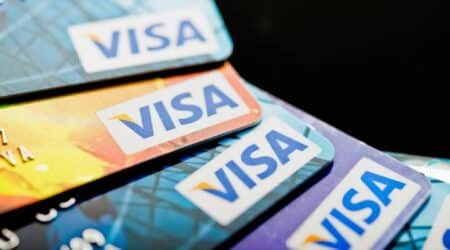 Visa to invest $1 billion in Africa