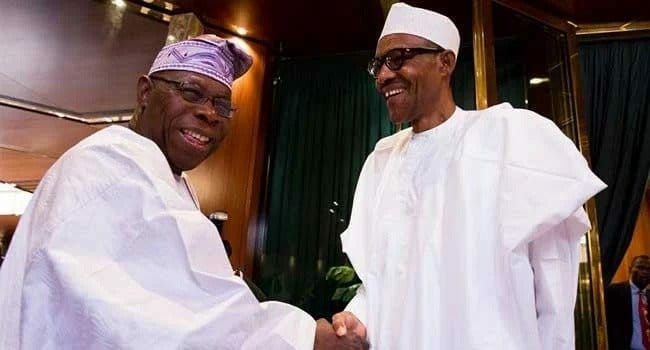 So Former President Olusegun Obasanjo came face to face with President Buhari yesterday 28th ofJanuary, for the first time since he penned an explosive letter urging President Muhammadu Buhari not to seek re-election over the perceived failure of the present administration.

The meeting was at the opening session of the ongoing 30th African Union Summit in Addis Ababa, Ethiopia, in which both of them are participants.

It was reported that Obasanjo came into the hall and immediately exchanged pleasantries with some African leaders already seated before seeking out President Buhari for a handshake and a brief chat.

The two were later joined for a photo session by the former head of state, General Abdulsalami Abubakar, as photographers rushed to snapshots of them.

Obasanjo released the explosive letter some days back in which he gave a damning assessment of the present administration’s performance and advising President to return home after the completion of his present tenure.

1. Obasanjo acknowledged he knew that President Buhari “is weak in the knowledge and understanding of the economy.” He added: “Although, I know that you cannot give what you don’t have and that economy does not obey military order. You have to give it what it takes in the short-, medium- and long-term.”

2. He said President Buhari is weak “in understanding and playing in the foreign affairs sector.”

3. He asked Buhari to stop condoning corruption among some inner caucus of the Presidency. “Culture of condonation and turning blind eye will cover up rather than clean up. And going to justice must be with clean hands,” Obasanjo urged the President.

4. He acknowledged President Buhari’s achievement in the fight against insurgency “although it is not yet uhuru!”

5. He accused the Buhari-led federal government of wittingly or unwittingly allowing the herdsmen/crop farmers’ crisis “to turn sour and messy.” He said: “It is no credit to the Federal Government that the herdsmen rampage continues with careless abandon and without finding an effective solution to it.”

6. He accused some Governors, who endorsed President Buhari for a second term a day after 73 victims (of herdsmen attacks) were being buried in a mass grave in Benue State without condolence, of being insensitive and callous.

7. He said the issue of herdsmen/crop farmers’ dichotomy should not be left on the political platform of blame-game and charged the Federal Government to take the lead in bringing about solution that protects life and properties of herdsmen and crop farmers alike and for them to live amicably in the same community.

8. He also accused President Buhari of “nepotic deployment bordering on clannishness and inability to bring discipline to bear on errant members of his nepotic court,” with special reference to Mainagate.

Mrs Folasade Adesalu, a member of Winners Chapel Ikorodu branch has shared her story of fruitfulness and her struggle with infertility after being diagnosed with endometrosis, blocked Fallopian tubes, fibroid, Ovarian Cyst, and her husband, a low sperm count. She even stated that even having children with IVF was negative.

“I got married to my husband Olumuyiwa in...