A purported UK based news website has again reported that President Buhari has been confirmed dead in London.
The unconfirmed rumour,
which is not based on any convincing evidence, is coming barely eight
days after the Nigerian President flew to London for his scheduled
follow-up medical treatment.
It would be recalled that similar rumours
from the same platform in the past have proven to be false.
The
wild rumour of the President’s death began to spread again for the
second time in the last four months on the internet on Sunday evening,
May 14, 2017 after a fresh report by Metro UK.
President
Buhari returned to London on Sunday, May 7, 2017 for a scheduled
follow-up medical checkup after receiving the recently released 82
Chibok girls.
Earlier, President Buhari had spent 50 days there between January 19, 2017 and March 10, 2017 on a medical vacation in London.
However, on Saturday, May 13, 2017, Femi Adesina,
the Special Adviser on Media and Publicity to President Muhammadu
Buhari had said no one except the president himself can tell the world
what is wrong with him.
Adesina said “It
is only the president himself that can declare that. It is within his
prerogative to do that. Nobody can do it for him. Not even the doctors
treating him can do it for him. Under the Hippocratic Oath, nobody can
do it except the patient.
“Nobody; under
the Hippocratic Oath, it says that even the doctor has no right to
reveal the health status of his patient to anybody. So, it’s only Mr
President that can say what exactly is wrong with him,” he said.
On Sunday, Adesina tweeted on President Buhari.
“Why
do some people rage and imagine vain things? It is the counsel of God
that shall stand. May God bless all those praying for PMB,” he tweeted.

The naira has appreciated to 386 agast the United States dollar as the Central Bank of Nigeria continues to supply dollars into the foreign exchange market.

The local unit closed at 386/dollar on Friday, having closed at 390/dollar daily in the past one week.
The CBN had supplied over $380m into the forex market a week ago.
According to financial and currency
experts, the naira’s outlook remains stable in the near term as the
regulator steps up efforts to improve dollar liquidity and achieve
exchange rate convergence.
The naira firmed to about 305.60 to the dollar on the interbank market on Friday, up from 305.1/dollar on Thursday.

The  General Overseer (Worldwide),
Redeemed Christian Church of God, Pastor Enoch Adeboye, in Jos on Sunday
urged Christians not to lose hope in Nigeria but to believe that there
is no problem impossible for God to solve.
The cleric also urged Nigerians  to
maintain a peaceful disposition towards one another, no matter the
situation they found themselves, saying it was only through such acts
that their prayers would be answered.
Adeboye spoke at the RCCG
inter-denominational service held at Kassa in Barkin Ladi Local
Government Area of Plateau State, where he rounded off the RCCG 2017
Northern Ministers and Workers Conference, with the theme, “The
Almighty.”

Life has become miserable for residents of six communities along
Igirigiri Road in Odo Ado area of Ado-Ekiti as a one-year power outage
has crippled socioeconomic activities.
Landlords in the communities are calling on Benin Electricity
Distribution Company (BEDC) to power a transformer recently repaired by
the Chairman

of Ado Ekiti Local Government, Ayodeji Ogunsakin, to the tune of N2 million.
They said the prolonged blackout has led to a mass exodus of residents
including tenants from their houses which has deprived them of income as a good number of them (landlords) are pensioners.
The affected communities are Ayunbo 1, Ayunbo 2, Ayisola 1, Ayisola 2,
Umesi and Akinyede.

Youths are consequently planning a public protest but are being calmed down by the elders who fear that the protest could turn violent. 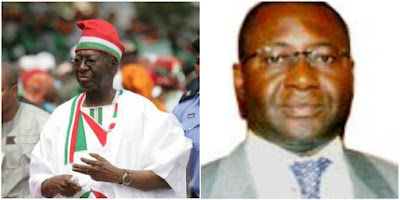 The family of former Chairman of the Board of Trustees of the opposition
People’s Democratic Party (PDP), Chief Tony Anenih, has been thrown
into mourning over the sudden death of their son Eugene Anenih.
According to a report by SaharaReporters, it was gathered that Eugene Anenih, son of
the influential politician and elder statesman, died of of heart attack while playing lawn tennis. More details later.