Get ready to giggle ad you read through today’s TLS which features the beautiful couple, Imokhai and Rukevwe.

This is How I Met my King

Meeting my fiancé was simply a divine arrangement. I was applying for my
MSc programme and needed an extra hand, so I got introduced to someone
undergoing the same course. This new friend happens to be Imokhai’s
friend as well.

The new friend and I added each other on BBM and after a
month or so, he called me on a particular Sunday and asked us to meet up
somewhere. My curiosity got the better part of me, and after much
inquisition, he told me how his ‘friend’ (who is now my fiancé) saw my
photo on his phone and wanted to meet me. I laughed it off initially but
after some pressure I agreed to meet with him, after all there was no
harm in having drinks and chatting.

We had our first date which I
reluctantly went for after my sister nudged me to go see him at least
for curiosity’s sake. Well it turned out great, in fact, really great!
He cracked me up so hard and within minutes I was almost rolling on the
floor! However, I was not sure where it was going to lead after the
first date but after several dates I fell in love with this amazing
human being.Before saying I do, I started to see beyond the face value
of Imokhai and how much I had come to adore him for who he is – his love
for God, strength, sense of responsibility and how he carries me along
in his affairs and decisions.Your heart is simply rare!

Imokhai
is a go-getter and for that I am his number 1 fan, I can recall him
vividly telling me over the phone that I am his wife. So simple yet so
true, Imokhai comes with no drama and that’s why I call him my perfect
complement, because I on the other hand, Hmmmm! I am the total package
(if you get what I mean) and he calls me his ‘Drama Queen’ and his Senior Advocate of Drama A.K.A Ololufemi and I call him my Adesugar.

How I Met my Queen

I was looking for a contact on my friend’s phone when I stumbled on a
very pretty image, this image brought a smile to my face and I
immediately asked my friend who the pretty lady in the picture was. He
told me he barely knew her and was only trying to help her with her MSc
admission process.

Well, I insisted he got across to her on my behalf
and inform her that I would like to meet with her. It was not easy
trying to get her attention as we were both strangers to her, however
after much persuasion she eventually agreed to go on a date with me.

She
insisted I met her up at home (her family house) before we headed out.
First date and my impression about her was perfect! Rukky was down to
earth, very creative, open-minded, smart, homely, fun to be with and
above all very God-fearing. She was everything I had imagined my wife to
be and even more.We did try to get to know each other as much as we
could and I enjoyed every bit of the process, though I had to travel the
next day.

However while I was out of town, I made sure we kept in touch
whilst I was away. At some point she asked me to stop calling her like I
was her boyfriend, LOL.

Rukky is a Drama Queen and so I told her I’m not your boyfriend I am your husband and you’re my wife.

She kept trying to push me away and was all pessimistic about the
whole marriage thing. However, as days and months went by she started
getting comfortable with me, my friends loved her, my both parents who
were all about me marrying a Yoruba girl fell in love with her when they
met her regardless of her tribe…. so “we’ went ahead to ask her out
August 2015 and my angel agreed to date me. That was one of my happiest
days.

I knew what I wanted and I went for it, I couldn’t have made a
better decision…. the conviction was soooo strong, my feelings
for her were so strong that I did not mind to sit in the tiring Lagos
traffic to see her on weekdays and of course almost every weekend, I
always looked forward to spending some time with her.

Fast Forward to The Proposal…

It was my mum’s 60th birthday and we all journeyed to my home town
(Sapele). He came along and we figured it would be a perfect opportunity
for him to meet the entire family. It was Valentine’s weekend February
2016. After the birthday thanksgiving we flew back to Lagos. I had
anticipated he would pop the question at my mum’s birthday but he didn’t
and I lost hope. We landed in Lagos on Valentine’s Day precisely, and I
was too stressed to go out, all I wanted to do was go home, but he was
able to convince me.

He took me to Lagoon Restaurant in VI… we were there
till 12am and by this time I was all sleepy, I told him we needed to
go, and as I stood up to leave he pulled me to himself and popped the
question, we had everyone’s attention at this time and they were all
screaming “Say Yes!” and doing all of the paparazzi stuff … well of course I said YES.

The love of my life and I will be tying the knot this month – August
2016 which makes it apparently one year from the time we started dating
as a couple, Imokhai has brought so much sunshine into my life!

It was her mum’s 60th birthday at her hometown and I was invited. It was
a good opportunity for me to meet the whole family at large and also
know where she’s from. I had initially planned to propose to her there
but changed my mind as I had a feeling she already had a clue. So we
flew back to Lagos on Valentine’s Day, she was tired and didn’t want to
go out but I was able to convince her to.

We were out all day and our
final destination for the night was the Lagoon, Victoria Island where we
had dinner and chatted. I was so nervous and stood up like four times
over dinner. When we were done and she was like ‘Baby that’s it for the night lets go home’...
she stood up and I pulled her back and BOOM! Popped the question… the
surprise on her face and her huge smile as she said a Big YES! was
priceless.

I bless the day I ran across her photo, she’s a wonderful lady and I
can’t wait to share the rest of my life with her, my very own Drama
Queen AKA Ololufe mi (my lover).

Shoot us a mail @ [email protected]

They came, they saw and they loved! University Sweethearts Odera and Daniel wed (first photos, videos) 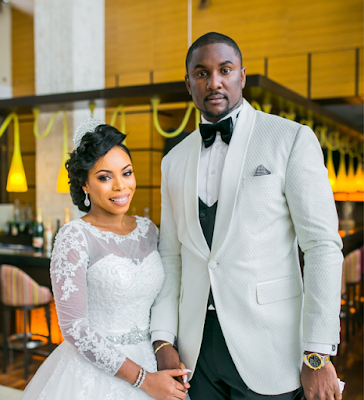 University sweethearts Odera and Daniel’s fab wedding (OD2016) which was planned by Trendy-bee Events, has been trending on Instagram since Saturday!

The beautiful couple got engaged in September 2015 after being together for almost 10 years.

They got married in the presence of family and close friends in Lagos last Saturday and former Governorship aspirant, Jimi Agbaje was one of the notable faces spotted at the event.

“The bride had tried reaching me for a long time ! It was one of
those very peak periods when we were super busy , but she was determined
it had to me …….I had to make it up to Her ….
Finally we met, I remember my first meeting with her mum and herself ,
...