Oliver Bierhoff has stepped down as managing director of the Germany national teams and academy.

The German federation confirmed on Monday that Bierhoff agreed to prematurely end his contract.

It was due to run through the 2024 European Championship.

Germany is set to host the Euro in 2024, but there are concerns about the team’s direction after a second successive World Cup exit at the group stage. This came after the same fate at the European Championship last year.

Bierhoff had a management role for 18 years since becoming manager of the men’s national team in 2004, two years after the former forward’s last game for Germany. He took over all of the national teams and academy in 2018 and received another promotion this year.

“Bierhoff has done a great job,” federation president Bernd Neuendorf said in a statement. “Even if the last tournaments fell short of the sporting goals, he stands for great moments. His work will always be associated with the World Cup success in Brazil.”

Bierhoff was credited with playing a key role in Germany’s 2014 World Cup win. He set the team up at Campo Bahia, where then coach Joachim Low fostered a winning team spirit.

But subsequent attempts to provide a similar team camp failed to yield the same results. Germany crashed out of the 2018 World Cup as defending champion at the first hurdle and has underperformed since.

“In the past four years we haven’t been able to build on previous successes and give the fans reason to celebrate again. Some decisions that we were convinced of did not turn out to be the right ones,” Bierhoff said in the federation statement. “No one regrets that more than me. I take responsibility for that.” 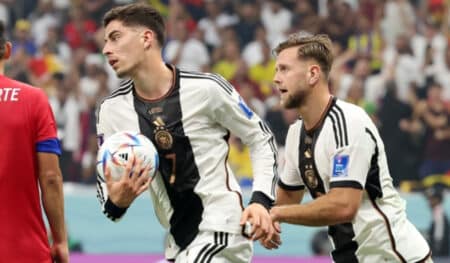