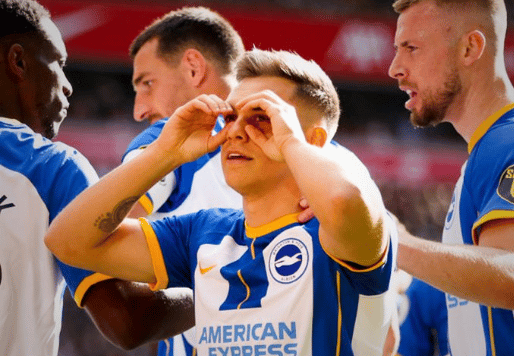 In a thrilling 3-3 draw on Saturday at Anfield, Liverpool overcame a two-goal deficit but were held back by Leandro Trossard’s third goal of the game.

Trossard’s quick-fire double gave Brighton an early lead that was clearly needed. After the half, Roberto Firmino scored two goals for Liverpool, but the hosts eventually took the lead thanks to an own goal by Adam Webster. Trossard, however, made sure the winnings were distributed with seven minutes left to play.

Brighton’s new manager, Roberto De Zerbi, got his tenure off to a great start as the guests took the lead after just three minutes and 48 seconds.

The visitors swarmed and swamped the home team as Alisson made a tonne of saves as the hosts entered the game having had their worst Premier League start in seven years.

The Brighton star neatly finished off a brutally quick counterattack with a nearly identical finish to his first just moments earlier after the Brazilian had denied Trossard.

Liverpool re-entered the game through pure willpower more than anything else. The Reds gathered enough red shirts around the ball twice in a row to create a pinball-like trajectory toward Mohamed Salah’s box. Robert Sanchez stopped the Egyptian from scoring himself, but he set up Roberto Firmino seconds later to cut Brighton’s lead in half.

Luis Diaz, whom Jurgen Klopp introduced during the break, had the desired effect in less than ten minutes. After leading a breakaway by Liverpool down the left, Diaz rolled the ball to Firmino in the box. Lewis Dunk was forced to the ground by a flash of lightning-fast feet before Liverpool equalised.