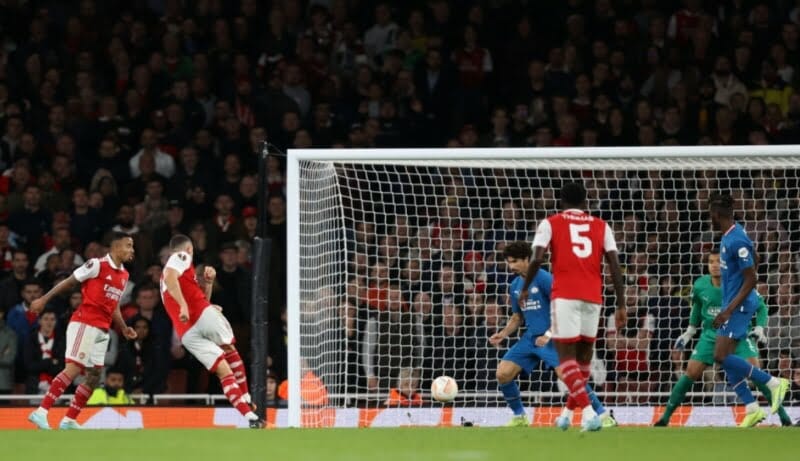 Today’s encounter is the only one in Europe, with Arsenal hosting PSV in a match that was postponed due to the passing of Queen Elizabeth II last month.

Granit Xhaka scored the game-winning goal as Arsenal defeated PSV Eindhoven 1-0 in the Europa League to continue his stellar year in an Arsenal jersey.

The Swiss midfielder, who is unquestionably a fan favorite, cemented his position with an exquisite half-volley goal in the second half.

The goal put the Gunners on the verge of winning the league and in the Europa League knockout stages.

Finishing first is important since it guarantees passage directly to the round of 16, as opposed to those finishing second having to endure an additional round of games.

Only Xhaka, Gabriel Jesus, and Bukayo Saka remained from the team that defeated Leeds 1-0 after Mikel Arteta made six changes.

The teams were deadlocked at 0-0 at the break despite the hosts dominating the first half. Walter Benitez was in goal for PSV.

Eddie Nketiah and Jesus both had opportunities, but they were unable to challenge the goalkeeper.

Cody Gakpo, a PSV winger that Manchester United and Leeds are interested in signing, was the topic of much discussion prior to the game, but Takehiro Tomiyasu handled him with skill.

With 20 minutes left, Arsenal finally scored as Xhaka finished expertly from right inside the PSV area.

The midfielder from Switzerland scored three goals this year, matching his total from the previous three seasons combined.

His incredible transformation from just three years ago, when his relationship with the fans seemed irreparably broken, is continuing with this performance.

He is currently a fan favorite at the Emirates.