England have released their squad numbers ahead of the 2022 World Cup.

Captain Harry Kane will wear the No.9 shirt, while Raheem Sterling takes the No.10.

Squad numbers can often provide clues as to who is favoured by the manager when it comes to selection.

Southgate will no doubt play down the importance of it, but in the final of the Euros last summer eight of the starting XI had a conventional 1 – 11 number on their back.

Some positions are nailed on, but others remain in doubt amid debate over who will start where. Jordan Pickford, who has been England’s first choice in the past two tournaments, is handed the No 1 shirt and is expected to start ahead of Nick Pope and Aaron Ramsdale.

There is debate over the right-back slot with Kieran Trippier and Trent Alexander-Arnold seemingly battling it out for the opening game whilst Kyle Walker, who has been given the No 2, recovers from injury. At centre-half much of the attention is on Harry Maguire, who is not starting for his club at present and is out form, but will wear No 6.

That said, he has been a favourite under Southgate and has been handed the No 1 shirt. John Stones is a lot of people’s pick to start at the back with England favouring three centre-halves under the current regime. Eric Dier, Ben White and Conor Coady are all options.

Jude Bellingham and Declan Rice are fancied to occupy the central midfield berths, but beyond them is anyone’s guess. Kane will command the forward spot, but his supporting cast is yet to be decided. Raheem Sterling has often come through for England and Southgate, but has struggled in recent weeks at Chelsea.

Phil Foden, for many, is a guaranteed starter whilst Manchester City teammate Jack Grealish, Mason Mount and Bukayo Saka are all options. James Maddison, who has been in tremendous form for Leicester, is seen as a bit of a wildcard and will don No 25. Conor Gallagher was also a surprise inclusion and will wear No 26.

Callum Wilson, who got the nod ahead of Ivan Toney, and Marcus Rashford are expected to be used as impact players from the bench and offer England with a different dimension. The World Cup squad met today at the St George’s Park base ahead of their flight to the Middle East. 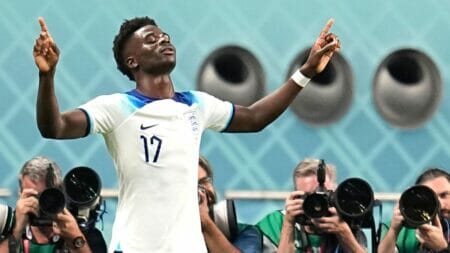