The Peoples Democratic Party (PDP) has called on the Independent National Electoral Commission (INEC) to immediately and without any further delay, issue Certificates of Return to Hon. Iduma Igariwe and Fred Udogwu as Governor and Deputy Governor of Ebonyi State respectively.

The Party gave the charge in a statement signed by the National Publicity Secretary, Debo Ologunagba, on Monday.

According to the statement, INEC needs to do the needful in furtherance of the Order of the Federal High Court issued in Abuja today, Monday, March 21, 2022 refusing to grant Stay of Execution to the former Governor of Ebonyi State, Dave Umahi, and his Deputy, Kelechi Igwe, over their removal from office by the Court.

The PDP also demanded that “the Chief Judge of Ebonyi State, upon the issuance of Certificates of Return by INEC proceed to swear in Hon. Iduma Igariwe and Fred Udogwu as Governor and Deputy Governor of Ebonyi State respectively.

“This is absolutely necessary to prevent the existence of vacuum in the government and governance of Ebonyi State as Messers Umahi and Igwe can no longer exercise the functions of the office of Governor and Deputy Governor of Ebonyi State pursuant to the Order of the Federal High Court which removed them from office on March 8, 2022 and the subsequent Order of the Federal High Court today, which refused their application for Stay of Execution.

“The PDP commends the judiciary for its courage in defending the Constitution as well as the will of the people of Ebonyi State as expressed in their votes for the PDP in the 2019 governorship election.

“Our Party also congratulates the people of Ebonyi State for the restoration of their mandate and urged them to remain united under the PDP as we forge ahead in our mission to Rescue and Rebuild our country from the rudderless APC administration.” 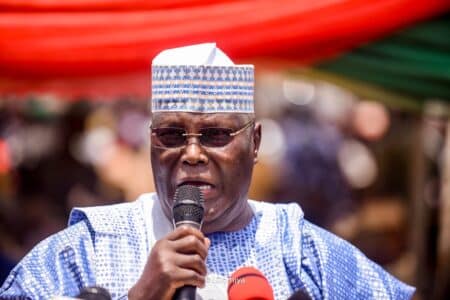