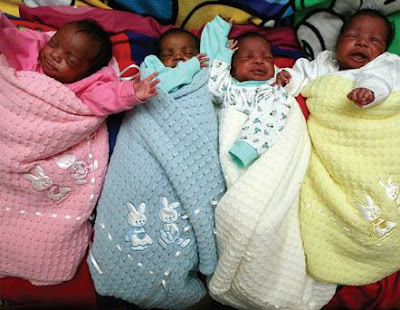 God is just so good!

A woman, simply identified as Mrs.
Nwigboji, has delivered four male babies four years after her wedding. Mrs.
Igboji delivered the quadruplets successfully at Mile Four Catholic Hospital,
Abakaliki.
When New Telegraph visited the
hospital at the weekend, the woman was said to be in stable condition but
unable to speak but their correspondent spoke to the husband, Chidubem
Nwigboji, who was full of joy.

He disclosed that he wedded his wife in 2011 and they had been having
difficulties in child bearing
and had also been facing pressures from his parents and
friends who had been pushing him to marry another wife which he refused.
His words:

“We married since 2011 which after my wife suffered
fibroid same year of the marriage. So, she underwent an operation and we began
to wait for the fruit of the womb. Last year my wife told me that she was
noticing a sign of pregnancy which I told her to wait, not until four months
when I told her to go for ultra-sound. The report of the ultra-sound showed
twins.
After some time, I asked her to go back for another
ultra-sound which she did and the number started increasing geometrically and
finally it revealed quadruplets.”
He called on couples, who are yet to
bear children, to trust in God.
“I saw hell in those four years because there was nothing
people did not tell me; some asked me to marry another wife that my wife may
not bear child. Even members of my family could not help matters; there mounted
serious pressure on me to go for an option of another wife and I promised God
that I will not do that.
Today, God has blessed me with all these babies at once and
I am very grateful for what He has done. Although I don’t have money; but
looking at these babies, I’m fulfilled,” he said.