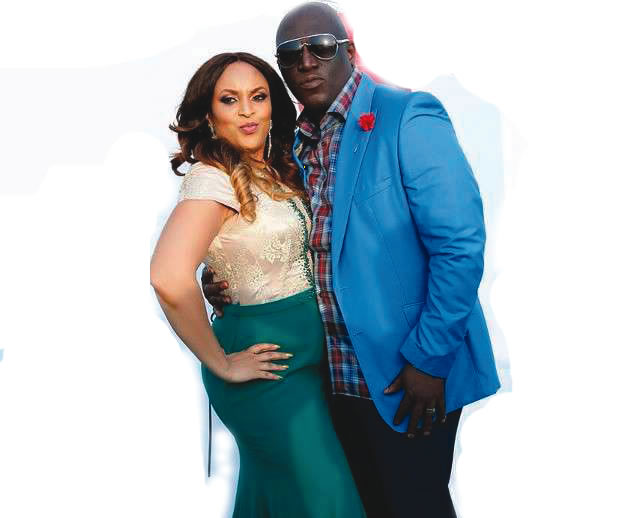 The Okposos
Sammie Okposo who is unarguably one of
Nigeria’s leading gospel brands has survived almost everything a gospel
musician should not survive. He has faced multiple scandals, church
suspension and vicious rumour mongering.
The Delta-State born gospel musician who
used to produce soundtracks for movies said he is ‘graciously enjoying’
his time with his wife without the divided attention a woman shares
with her children and husband.
Sammie whose marriage will be six years come July 1, said in an exclusive interview with Sunday Scoop that
he is not bothered by the fact that he is yet to have a child with
Ozioma Okposo who is the younger sister of Kene Mkparu, the CEO of
FilmHouse and Filmone.
‘‘I am happily married. I am happy I did
not get married before I married my wife. I married my best friend. She
is a good woman, she is a supporter. She loves Sammie Okposo and not
the superstar. We were friends for three and half years before we got
married.’’
Speaking further about their not having a
child yet, he said, “I am not bothered. Why should I be bothered? Am I
God? Anything that has to do with life is not in my control. God is the
person with the final say when it comes to childbirth. It is going to
happen, because delay is not denial. However, it is not affecting the
happiness in my home. I am not waiting for my wife to give me a child to
bring extra happiness. It has not even formed a discussion in our home.
God is the owner of babies; he is the one that gives.
“I thank God because he did not give me
some things when I wanted them. In the meantime, I am grooving, rocking
and graciously enjoying my wife because there is no distraction and
responsibility of raising a child yet. When God feels we have enjoyed
ourselves enough, he will give us double for our trouble. The way we are
now, if I’m  on tour in America and I miss her, she could join me if
she’s free but when babies are involved, you can’t just leave home like
that.”
The gospel singer who had a
well-documented dalliance with Kate Henshaw in the past and has a
reputation for women, said all his attention is now on Jesus and his
wife.  “It is a time to focus, I looked at myself in the mirror and
spoke to myself. As far as Sammie Okposo is concerned, no more side
chick for me. It is not even a topic of discussion,” he said.
Speaking further, Sammie said he is
concerned about the trend of inviting secular artistes to the church to
minister. In time past, Korede Bello signed under Mavin Record and some
other musicians have been invited to different churches to sing. Sammie
who is a Globacom ambassador said, “It is totally wrong.”
“It is 100 per cent wrong for a church
leader or a church denomination to bring a secular artiste to minister
in church; what we have is an altar not a stage. You cannot take people
to a place you have never been. As long as you are not a gospel
musician, you are not anointed to minister on the altar of God as a
singer. It doesn’t matter whether you used to sing in the church or
not,” he added.