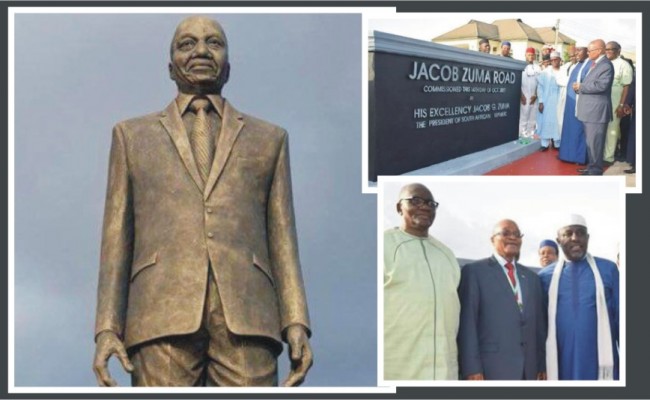 Nigerians are lambasting Governor Rochas
Okorocha of Imo State for unveiling a statue in honour of South African
President Jacob Zuma and naming a road after him in the state capital,
Owerri.

This is not going down well with Nigerians as the question on
the lips of everyone is, why on earth Governor Okorocha would go up to
that extent because there is no justification for his reckless act.

encomium.ng sampled the opinions of Nigerians:

What is the importance of the erection of Zuma’s statue? Okorocha has
to explain to the world. Is it not the same Jacob Zuma who has been
discredited in his native South Africa? His kinsmen wants him tried for
corruption and Okorocha is celebrating him more.

I strongly believe that Okorocha and Zuma are birds of same feathers.
What a shame! There are state projects lying there undone, and all our
dear governor can think of is building the statue of someone who has not
impacted us in any way.

That’s another trick to embezzle money. By the time they finish doing
it now, they will say its N60 billion they used to erect the statue.
Meanwhile, what has Jacob Zuma done for his people in South Africa? Not
to talk of Nigeria, or Imo state itself. Okorocha is not in his right
senses, he doesn’t know the next thing to do.

This is one of the carelessness of some of our governors. This spate
of impunity must be checked. Okorocha is just been frivolous because he
enjoys immunity, somebody should call him to order.

This is not the time for trivialities like erecting a statue of a
South African who has all the apparatus to protect Nigerians in South
Africa which he heads but failed to do that. This is executive rascality
on the part of Rochas Okorocha.

I think maybe Okorocha shared out of the money Zuma stole. He is not
even in Nigeria or in Imo state. It showed thoughtless of him, he
doesn’t even have good advisers in his cabinet, he is just wasting our
resources. Maybe the money is just too much.

What he did is wrong, though am not from Imo state but I once served
in the state. I mean there are some dilapidated structures that needed
to be rebuilt and put in good shape, roads need to be done. He shouldn’t
have gone that extent of setting up a statue of a stranger and naming a
road after him. That’s arrant nonsense.

Why would Okorocha be promoting a corrupt leader? A man held for
corruption in South Africa, that his country is demanding for his quick
removal. I am not in anyway pleased with Okorocha’s action, he needs a
second thought.

I have still not come to terms with why Okorocha unveiled a huge
statue of President Zuma in Imo state. I don’t think its ordinary. There
is more to it than meet the eyes. Something is definitely behind it,
they should apprehend and interrogate him. He need to disclose where he
coughed out such an amount. He is a rogue!

He played host to President Zuma, ex-president Olusegun Obasanjo was
even there to receive him. Watch them, they are all corrupt leaders,
celebrating corruption in the broad day light. Is this how the APC-led
government wish to fight corruption? Okorocha should be indicted.