Two killed, eight injured in an accident in Sango 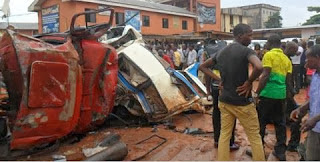 The Federal Road Safety Corps has confirmed that two persons died, while
eight others sustained injuries in an accident along the Ilo-Awela Road
in Sango-Ota, Ogun State today.

The Unit Commander of the FRSC in Ogun, Mr. Adekunle Oguntoyinbo, made
the confirmation while speaking with the News Agency of Nigeria in
Sango-Ota.

He said the accident was caused by brake failure at about 8.20 a.m.
Oguntoyinbo said the incident involved two buses, one of which was a
commercial bus.

He stated, “The brake of the commercial bus failed and it crashed into
another bus at the toll gate, resulting in the death of two persons and
injuring eight others.

“The bodies of the dead have been deposited at the morgue of the Ota
General Hospital in Sango-Ota, while the injured persons are receiving
treatment in the same hospital.”

Oguntoyinbo counseled motorists to ensure that their vehicles are in good condition before putting them on the road.