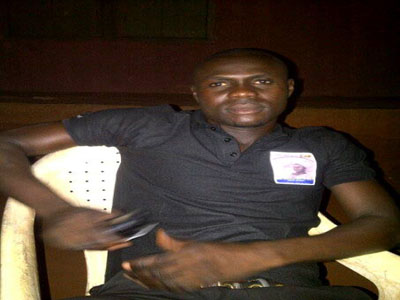 This orphaned National Youth Service Corps  (NYSC) member, on election duties, Okonta Samuel Dumebi, was
shot dead during  Saturday’s Rivers legislative election yesterday.
He was on duty at Ahoada West Local Government Area where he and two
of his colleagues were attacked, the Nation reports
.
They were shot at by hoodlums who were trying to frustrate the conduct of a free and fair election.
The two others were lucky to escape into hiding, but Okonta was shot dead.

Another Youth Corps member, Anana Aniekan Udoetor, who was declared missing after the shooting, has returned hale and hearty.
The NYSC yesterday confirmed Okonta’s death, describing his killing as “primitive, barbaric and ungodly”.
A statement by the NYSC management said:

“The management of the
National Youth Service Corps regrets to announce the loss of a Corps
member Okonta Dumebi Samuel (RV/15B/5539) during the rerun elections
held in Rivers State at the weekend.
“Corps member Okonta Samuel, who until his demise served at GCSS
Ukpeliede, was shot dead by some unknown gunmen in Ahoada West Local
Government Area.
“The murder of this patriotic young man, who was an orphan, is
primitive, barbaric and ungodly and should be strongly condemned by all
well-meaning Nigerians.
“The NYSC shall work with relevant agencies to ensure that the
perpetrators of this heinous act are fished out and made to face the
full wrath of the law.
“We consider Okonta Samuel’s death as a great loss, not only to his
immediate family, but also to all of us in the NYSC family and the
entire nation.
“May the Almighty God grant him eternal rest, and give his immediate
family and the rest of us the fortitude to bear the irreparable loss.

“Meanwhile, two other Corps members that were with the deceased at
the time of the incident escaped from the scene through the help of
security agents.
“We also wish to inform that another Corps member, Anana Aniekan
Udoetor (RV/15B/5537), who was earlier reported missing, has been found
and is hale and hearty.”

No fewer than seven people were also believed to have been killed in
various parts of the state in the bloody election. But the police said
four people died and that 22 people were arrested.