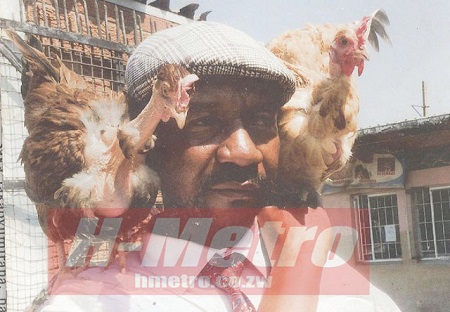 Philemon “Hot Stepper” Murefu
Philemon “Hot Stepper” Murefu, a 38-year-old Mabvuku man reportedly conducted a funeral service for his chicken which he had been keeping as a pet.
According to H-Metro, Philemon “Hot Stepper” Murefu is also known in the ghetto for dressing up his dogs as well as walking with his chickens on his shoulders.
Two weeks ago, he made news in his neighbourhood when he invited friends and relatives for a funeral service to mourn his bird.
In an interview, Philemon said he decided to conduct a funeral service for his chicken which he had stayed with for two years.
Philemon said he had a special bond with the bird, prompting him to give it a ‘special’ send off.
“When I was a young boy, my mother had so much passion for
animals so I was raised in an environment where they were so many
domesticated animals.

“I am really affected whenever an animal which I would have
kept dies, the same feeling I get when losing a loved one is the same
when any of my pets dies.

“I shed tears when one of my chickens dies, the bird was a
special bed to me because for the two years I had stayed with it was
friendly and loving to me.

“It died when I was not at home and I was informed about the
death over the phone and I told them not to bury it because I wanted to
give it a befitting send off,” said Philemon.
He said that though some of his neighbours and relatives despised
him for mourning the bird he did not stop doing what he thought was
right.
“I got so many insults from people close to me especially some
of my relatives and friends they were accusing me of doing something
that was taboo but they did not understand the bond I had with Beauty.

“When I came back home I mourned my friend and I buried it at
the corner of the house, I invited friends and those who were willing to
me came and we mourned my bird and everything went well.

“I am now looking forward to put a tombstone at the grave, what
I did was temporary but I am hoping to raise money soon and do a proper
thing,” he said.
Apart from the love he had for chickens, Philemon is also known for dressing two dogs with expensive clothes.
“I have two dogs namely Bush and Masket and one of the things I
do every month is I set aside a budget of US$5 per dog which will be
meant to buy clothes.

“I don’t treat my dogs like what I see most people in Mabvuku
doing, I treat them as my own children that’s why I buy them clothes.

“They both have a wardrobe full of clothes that most people
don’t have, I buy these clothes from local boutiques as well as from
vendors,” he said.