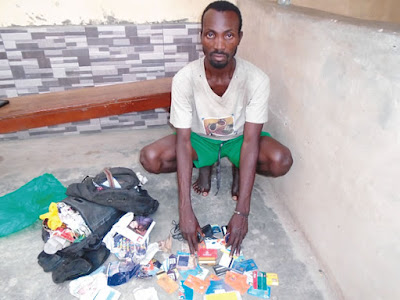 A ‘mad man’, Lanrewaju Jaiyeola, has been arrested with 22 Automated Teller Machine cards, two mobile phones and a power bank.
The police said they were not convinced that Jaiyeola was actually mad,
adding that initially, he was lucid before he started talking
illogically.
It was gathered that Jaiyeola, 39, was intercepted by the RRS operatives
with a backpack on Ozumba Mbadiwe Road,Vitoria Island,Lagos.One of the
RRS men, who declined identification, said,

“When we sighted him, he appeared like a mentally-ill man, but we
invited him for interrogation. He responded normally to all our
enquiries.
“A few minutes into the interrogation, he started straying from the
normal course of our enquiries and was not making sense at all. This
raised further curiosity and we decided to search his backpack.“Inside
the backpack, we found 22 ATM cards, one Nokia phone, a BlackBerry, a
power bank, several bank tellers of recent bank transactions, and lots
of invoices hidden in pieces of papers.”

It was learnt that eight of the credit cards were still valid, and they
had different names and banks. The officers took him to their base in
Alausa, Ikeja.
A policeman at the base told our correspondent that the suspect made
“statements suggestive of somebody disguising as a mad man to perpetrate
crime”.

He said, “Initially, we noticed that he was mentally balanced because he
was answering the questions posed to him adequately. But all of a
sudden, he started sounding incoherent and illogical again.
“While interrogating him, he threatened the Investigating Police
Officer, saying, ‘I will make life unbearable for you if you don’t let
me go’.
“It was at this point we realised that possibly he might be enjoying the
patronage of some highly-placed people whom we believe he was working
for.”

The police said the suspect was on their watch-list for about two weeks before he was arrested.