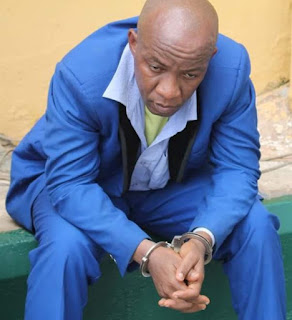 The Abia State Police Command have apprehended a pastor who runs an
illegal medical centre and Baby Factory in his church.
Briefing newsmen
on Monday, June 5th, at the State Police Headquarters, Umuahia, the
Commissioner of Police, CP Adeleye Oyebade, who paraded the pastor along
with other suspect, disclosed that on the 24th of May, information was
received that a storey building located at Faulks Road Aba, which
doubles as a Church and Medical centre was converted to Baby Factory.

Working on this information gathered, a team of Policemen attached to
Ariaria Division led by the DPO stormed the premises where five
pregnant young girls were rescued and one Christopher Adebanya Tochukwu,
the Pastor of the Church and the operator of the clinic who earlier
fled the scene was arrested.

Upon interrogation, one of the pregnant young girls alleged that she
was raped by the so called pastor that morning, while another alleged
that the pastor attempted to rape her if not for a broken piece of glass
she used in self-defense.

However, another girl claimed that her two month old baby delivered
therein was forcefully taken away from her by the pastor’s wife (now at
large) and sold to an unknown person.

A two week old premature baby girl rescued at the scene has been taken to a motherless baby’s home for care and custody.