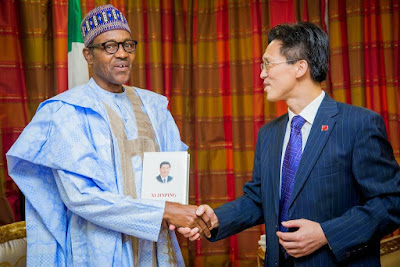 Evening Kfbers! For the Newbies, #TheMajorHeadlinesYouMissedToday is a newly introduced column on Kemi Filani Blog to help you keep with up the major political happenings in the country/world! Here are the major stories you should know about;


EFCC re-arraigns ex- NAMA MD, 3 Director and one of their wives, over N6.8B

The Economic and Financial Crime
Commission (EFCC) has re-arraigned ex-Managing Director of the Nigeria Airspace
Management Agency (NAMA), Ibrahim Abdulsalam and six other persons over alleged
siphoning of the agency’s fund, amounting to N6,850,447, 609.90.
The anti- graft commission had last
week Thursday arraigned the NAMA boss, three directors of the agency and the
wife of one of the directors.
EFCC alleged in the charge that the
defendants on December 19, 2014, forged a document titled ” Guaranty Trust Bank
Plc  Apapa 2-Burma road NCS Payment Acknowledgement receipt number:
05821082014177651″
China Offers Nigeria $6bn Loan
for Infrastructural Development
According to the Nigerian foreign
minister, China has offered the Nigeria government a loan worth $6bn to fund
infrastructure projects. “It is a credit that is on the table as soon as we
identify the projects,” Nigerian Foreign Minister Geoffrey Onyeama told
newsmen, after the Nigerian president Buhari, met Chinese President Xi Jinping.
“It won’t need an agreement to be signed. It is just to identify the projects
and we access it.”
China’s Xi told Buhari there was
huge potential for economic cooperation in areas like oil refining and mining,
according to Xinhua, China’s official news agency.
In a speech to business leaders,
Buhari said both countries wanted to work together in agriculture, fishing and
the manufacturing of cars, construction materials and textiles.
Facebook CEO, Mark Zuckerberg, takes a jab at US
Presidential Aspirant Donald Trump
Facebook CEO Mark Zuckerberg openly
espoused that he is anti-trump. He took a dig at Donald Trump and his
anti-immigrant rhetoric during a speech to lay out his vision for the
Facebook’s future.
In his keynote address, to the Facebook Developer
Conference on Tuesday, Zuckerberg said, “I hear fearful voices for building
walls… Instead of building walls, we should build bridges.”
“Instead of dividing people we can connect people. We do it
one person at a time, one connection at a time. That’s why I think the work
we’re doing together is more important than it has even been before,” he said.
Zuckeberg’s comments contrast with Trump’s repeated calls
for building a wall along the border with Mexico. Trump also had recently
unveiled his plans of getting Mexico to pay for its construction by threatening
to block workers in the United States from remitting money home to their
families.
Ambode to Move Mile 12 Market In Six
Months
Governor of Lagos State, Mr.
Akinwunmi Ambode, has said that the Mile 12 Market will be relocated to Imota
within the next six months. Ambode said this on Tuesday when he inspected the
proposed site of the market in Imota. The reason for the move is largely due to
the incessant ethnical crises among the traders
breaking news China Donald Trump Kemi filani headlines Mark Zuckerberg Naija news news now News Today Nigeria nigeria news
Share. Facebook Twitter Pinterest LinkedIn Tumblr WhatsApp Email
Previous ArticleLost but found! Cynthia Morgan is full of thanks to God after getting back her stolen range rover…
Next Article Wednesday daily devotion by Pastor E. A. Adeboye (Open Heavens 13 April 2016) – The Sovereign God