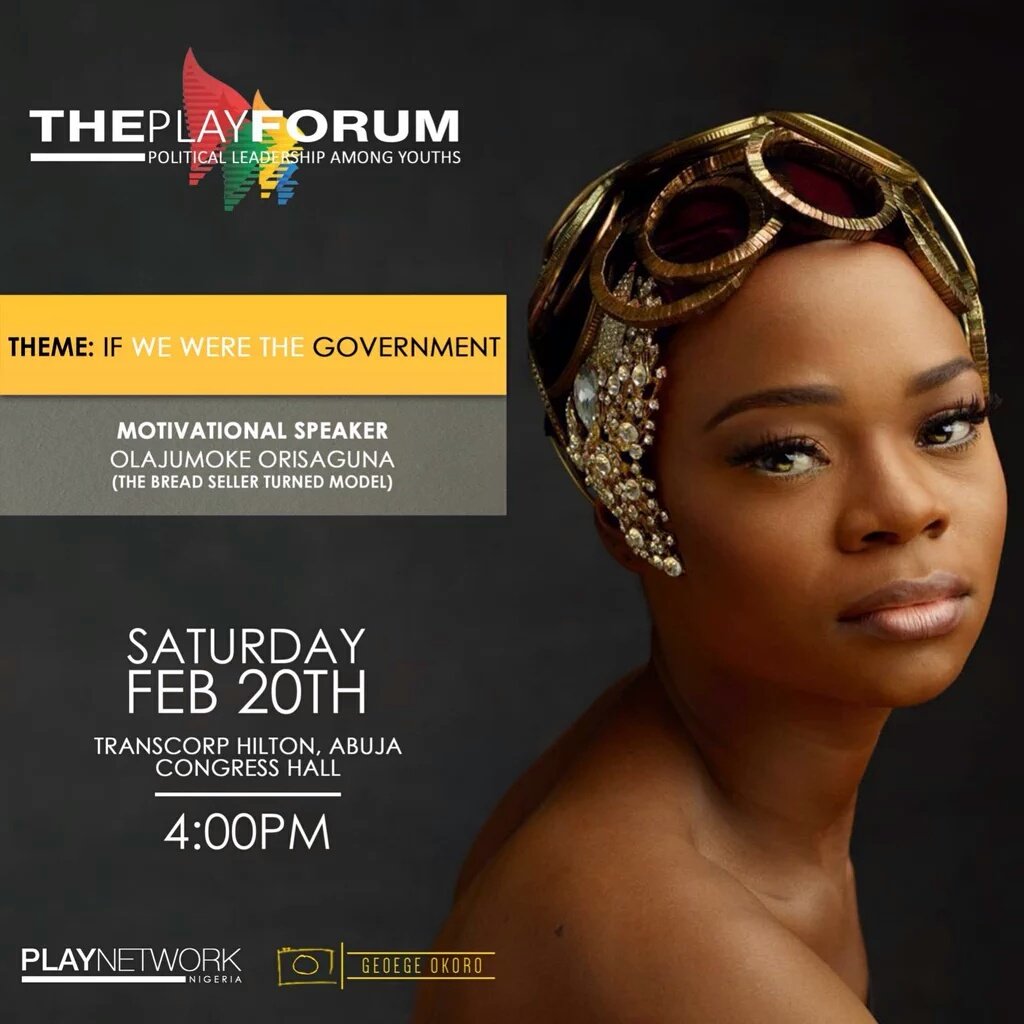 Again, Agege bread seller turned top model Olajumoke Orisaguna is trending on social media. Thus time around, the 27 year old mother of two is causing a twitter meltdown after a creative describing her as a ‘motivational speaker’ emerged on social media.

The event hosted by the PLAY forum will see Jumoke share her story at the Hilton Hotel, Abuja on Saturday. Another pic below:

Twitter users think its ridiculous that Jumoke who can not even speak
yoruba without a dialect, talk more of English is being named as a motivational
speaker and that Nigerians are starting to exploit her brand.
HERE ARE FEW RESPONSES FROM PEOPLE

sheystics This
is good yh. But am i the only one that feels like people are trying to
exploit Olajumoke’s sudden fame? Hiding under the guise of caring about
her story. #justspeakingmymind

[email protected]
I wish it was @tybello that was the motivational speaker it would be
nice to hear her explain how easy it is and encourage women to support
each other I doubt there’s much Jumoke has to say and to be honest I for
one and everyone else on Instagram/the world knows her story she sells
bread she photo bombed is now a model shikena!!!#truth
[email protected] funny but true

destty24 i thought they said she cant speak english..now she is going to be the motivational speaker
jennypher_oyesLove
Jumoke and her story but I have to agree with @carrotabuja @tybello os
not only a master in her field but is a woman let’s forget the hype of
Jumoke for a second. TY Bello saw a gift in Jumoke and decided to
enhance it that is a woman using her network to support another woman
and there needs to be more of that and not whose weave is longer than
whose weave and whose shop is in Wuse and whose shop is in gwagalada.
There needs to be of a united front where women are concerned and that
is why men have dominated the business platform for so long because they
have shown that ego aside they can work together to strategise and get
money TOGETHER. There is a new trend and that is Female CEO’s from Helen
Brand the CEO of ACCA Global to Susan Wojcicki CEO of YouTube and Maria
Mayer of Yahoo. Let’s touch on the real issues something that people
can really take away with them and implement.

Follow the trend
HERE. What do you guys think?