For starters, pop star Wizkid and popular blogger, Linda Ikeji aren’t best of friends.
Wizkid
has over time publicly expressed his displeasure with the blogger and
today he saw another opportunity to take shots at her and he took it.

As if that’s not enough, he went on Snapchat to share the image below; 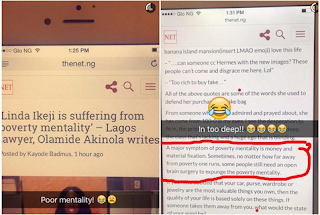 Here is the article: “When Linda Ikeji bought a huge house in the luxury Banana Island, most people were happy for her and wished for such to happen to them too. In fact, I sent her an email congratulating her and hoping I can write for her blog someday.
.
.
Yesterday, Linda Ikeji showed off two Hermes Birkin bags on her Instagram page as new acquisitions. Before anyone could say jack, internet trolls had sent the bag to Hermes for Authentication. Hermes came back and confirmed the bags are fake.

I do not believe she knew the bags were fake, so I’ll give her a pass for that. What shocked me was the way she went all out to defend herself, like her life depended on it .
.
– “I can afford to buy a N500m house but can’t afford a $14k bag? B**ch pls!” .
.
– “This lovely bag cost me more than these haters cars cost and they want to come and disgrace me online? Lol. Lailai”
.
.
– “The side of the bag. Oh and I’m snapping from my banana island mansion(insert LMAO emoji) love this life
.
. – “can someone cc Hermes with the new images? These people can’t come and disgrace me here. Lol” #
.
.
– “Too rich to buy fake.” All of the above quotes are some of the words she used to defend her purchase of a fake bag

From someone who people admired and prayed about, she has come from 100-0 in my eyes. I see the desperation to fit in, the pride that comes from wealth but is skin deep, the class that’s lacking and a huge ego that is blinding.

A major symptom of poverty mentality is money and material fixation. Sometimes, no matter how far away from poverty one runs, some people still need an open brain surgery to expunge the poverty mentality.

If you have decided that your car, purse, wardrobe or jewelry are the most valuable things you own, then the quality of your life is based solely on these things. If someone takes them away from you, what would the state of your mind be?”