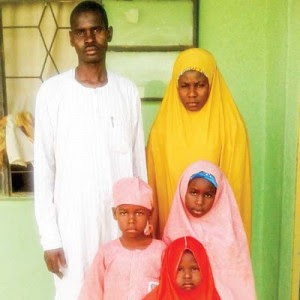 Residents of Makarahuta area of Azare, headquarters of Katagum Local
Government Area of Bauchi State are still in shock following the death
of an Islamic teacher and his entire family members in an early morning
fire in their flat.
The early morning inferno killed Malam Jamilu Musa Zaria, his wife Yusra
and their three children while trying to escape from the fire that
en­gulfed their house.

Malam Jamilu Musa Zaria, 29, his wife Yusra, 24, his daughter, Hauwa 5,
his son Sulieman 3, and last child Halima, who was two months and six
days old were trapped inside their flat at Makarahuta area of Az­are
after the fire broke out at about 2 am in the morning of March 4.

Jamilu’s next door neighbour, Abubakar Lawal, told Saturday Sun, that
his wife heard the distress call from Yusra for help. He said that he
immediately, stormed out of his apartment to see what was the problem in
his neighbour’s flat only to behold fire that had completely consumed
Jamilu’s flat.

“Before we knew it, the fire had spread to my own flat forcing me , my
wife, children to rush out into the compound. I tried to force the door
into Jamilu’s flat opened but the heat coming from the inferno was too
much,” Abubakar, a Federal Road Safety Commission (FRSC), recalled.

After escaping with his own fam­ily, Abubakar discovered that the key to
the gate was in his flat.

“We couldn’t come out of the compound, so my
wife and I continued to shout for help.”

Abubakar said that his wife went towards Yusra’s windows and called out
to see if the helpless mother could at least hand the two-month old
baby, Halima, over to her through the window. But the bur­glary proof
and the raging fire made that impossible.

While Abubakar and his family escaped unhurt, they lost all their
belongings to the inferno. “I lost everything. I only came out with the
shorts and vest on me. My wife came out with the only wrapper on her.
Same with my children,” he said.

Abubakar is squatting in a neigh­bour’s house while well-meaning
neighbours and residents of Azare have been trooping to his abode to
condole with him over the death of his neighbours, with many coming with
clothes and food items.
According to him,

“Up till now, I am still in shock. My neighbours and
his family died the most painful death. I am doing a programme at the
College of Education, Azare and I almost deferred it because I don’t
know how I can cope because, the sad memory of their death is always
with me. My wife even fainted that very day as she heard the screams of
Yusra. As a mother, it is painful to watch another mother and her two
-month old infant dying and there was nothing you could do to rescue
them. My wife is still traumatised and she used to have nightmares”

Abubakar said nobody knew up till now, the cause of the fire. How­ever,
it appeared the family was wo­ken up from their slumber by a thick smoke
and it was too late to come out with the flat secured with iron bars.
Saturday Sun also learnt that the power supply had been disconnect­ed
from the vicinity for quite some time so electrical fault was ruled out
as possible cause of the fire. One of the versions had it that it was a
mos­quito coil that the family was using before they retired to bed that
caused the fire.

Another speculation was that perhaps, Yusra left
something on the fire in the corridor inside her flat where she normally
cooked. Whatever was the case, the death of the family has brought much
sor­row to the people of the area who described the Islamic teacher as a
good man.

Abubakar, an indigene of Hawul in Borno State, said:
“We have been
living together peacefully for over a year now. Jamilu joined me after
my former neighbour moved out and since then, we have been living
cordially as neighbours. He was a good man and he didn’t quarrel with
anybody. He was a peace-loving person.” According to Mustapha Shehu, one
of the deceased’s neigh­bours who was among the people that evacuated
the charred bodies of the victims, what he saw after the in­cident was
better imagined. The fire reduced the property in the house to rubbles
and burnt the occupants be­yond recognition, he said.

“I saw one of the adults, Jamilu I presumed, because it was difficult to
tell the features whether it was a man or woman, clutching two of the
children in the toilet. They apparent­ly died there as they tried to
escape. The body of the other adult whom we assumed was the wife, was
found in the bedroom perhaps hold­ing her two months old baby before
they died. It was the most shocking scene I have ever witnessed in my
life,” Mustapha said.

Jamilu’s elder brother, Mallam Suleiman Zaria, a well known Is­lamic
teacher in Azare, who brought the late Jamilu up was still in shock when
Saturday Sun correspondent visited his house which is a stone throw
from where Jamilu and his family lived and died.
According to Suleiman after whom Jamilu named his second child, in
honour of the man who brought him up like a father, he was at home when
there was a knock on his door at about 2:30 am on the fateful day.
He said he wanted to come out but his mother prevailed on him that it
was late, so he obeyed her. He said that the knocking came the second
time but by that time, the old wom­an had slept, he opened the door and
was told of what happened. Sulei­man said when he rushed there, the
sight he saw was gory and he was shaking and had to be led quietly away.

“It was a sad incident. Jamilu was with me since he was seven years old.
He died at the age of 29 years, seven months and eight days. I can
remember that before their death, strange things happened. One, on that
fateful day, which was March 4, 2016, he came to my house more than six
times. He never met me at home each time he visited. When my wives told
me when I came home, I asked him to come and we spent some time
to­gether talking. Secondly, my two wives had dreams at the same that
five corpses were being washed. Thirdly, Jamilu’s wife dreamt that she
saw blood flowing. She came to my house to inform me of the dream and I
prayed with her and gave her some verses of the Quran to read. Jamilu’s
death and the way he died with his family is painful but we’re leaving
everything to Allah. What I can say is that I respect him because he
lived a good and exemplary life. I have been on medication since the
incident happened because I de­veloped high blood pressure. May their
souls rest in peace”

A neighbour, Malam Umaru Shehu, said it was sad that Jamilu struggled to
save his family from the inferno to no avail. Shehu urged the state
government to establish more fire fighting stations and equip them with
modern fire fighting ve­hicles and gadgets to prevent such unfortunate
and sad losses during fire outbreaks.