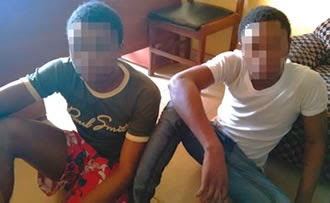 23-year-old Isaac Adejuwon (not real name) is one of the soldiers who has
been a part of the Nigerian troops battling the Boko Haram insurgency
in the northern part of the country.
The police have withheld his
identity pending when the military would be notified of his crime.,

Speaking to Punch, he said what the Nigerian Army was paying him was
enough but that he simply wanted more, which was why he decided to carry
out a few robberies before going back to his Maiduguri base in Borno
State.

“Usually, among those of us taking part in Operation Zama Lafia, the
army regularly chooses 10 soldiers to go and spend 10 days with their
family. It was my turn this time. But I wanted to make some money before
going back to Maiduguri,” .

When Adejuwon got to his hometown, in Ibiade area of Ogun State, he
immediately contacted his childhood friend, 20-year-old Fasasi Idris.

“When I suggested robbery to Idris, he told me that he knew an uncle of
his that we could rob. So, on January 27, 2015, we visited the man in
Ibadan to see how we could rob him. But when we got to his house, he
entertained us in such a way that I had a change of heart.

“I told Idris that the man was too nice for us to rob. Idris also agreed
and we left the man. While on our way back to Ibiade, we realised that
the private car that we boarded had just a passenger along with the driver and both of them did not understand Yoruba. Right inside the car, we decided to snatch the vehicle.

“I had bought a military jack-knife for N3,500 and also bought a locally
made pistol before I left Maiduguri. I gave the knife to Idris while I
held on to the loaded gun.”

When the vehicle transporting the two men got to a bridge near Sagamu, Adejuwon pleaded with the driver to stop because he was pressed and needed to urinate urgently.

“I told him I could not go any further without urinating. When he
stopped and I pretended to urinate, I brought out the gun and went to
the driver’s side while I also signalled to Idris to handle the
passenger.

“I pointed the gun to the driver and he was resisting, so, I decided to release a shot in the air. While I struggled for the key with him, the driver stabbed me in the hip and I was bleeding heavily.”

Idris succeeded in restraining the other passenger who later fled along with the driver.The two young men sped off in the car and took it to their hometown in Ibiade.

However, they both ran out of luck when they got to the town and Adejuwon sighted a young girl he had a romantic interest in.

“I decided to give the girl a lift
and we were riding around the town when policemen at a checkpoint
arrested us. We could not explain how we got the car. We actually wanted
to sell the car but we could not get a buyer before we were arrested,”
he said.

When he was asked whether he had the intention of going back to Maiduguri to continue his duty, Adejuwon said,

“Yes sir. I would be happy to go back to continue my military duty. I
like being a soldier. I killed many Boko Haram members. I really enjoyed
that. I joined the army two years ago when I was looking for a job.”

Idris, who said he only went along with the robbery plan because he had no job, explained that he was an air conditioner technician but had no money to establish himself.

“My father is late and my mother is not doing so much in Ibadan. I am
the one taking care of myself. That’s why I needed money,” he said.

The police spokesperson in Ogun State, Mr. Muyiwa Adejobi, said
investigation was still ongoing and that the police would inform the
military about the case.