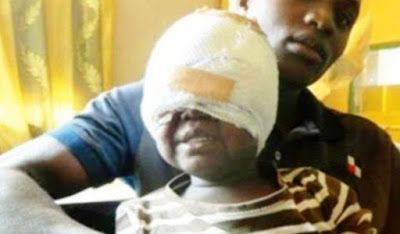 It’s been a nightmare for the little boy who had his eyes plucked out by
ritualists in Zaria. His heartbroken father,Usman Isa told Daily Trust
after doctors at the Ahmadu Bello University performed an operation on
the little boy,they revealed he will not see again,except a miracle
happens. He said in tears: 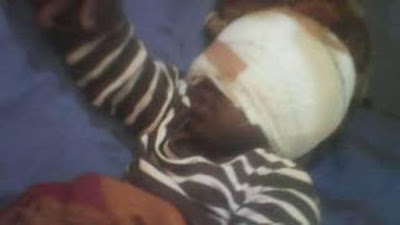 “The Kaduna hospital has referred us back to ABUTH. Doctors have
conducted surgery yesterday. From what they told us, the perpetrators
have removed everything that has to do with the eyes, which would make
fixing them difficult. However, doctors said that they would review the
operation to see the outcome, hoping they can fix artificial ones.” He
said the doctors said the artificial eyes would be fixed just to fill
the holes, but not for the young boy to see. “Except if Allah performs a
miracle,”

Meanwhile the grandmother of little Usman, Malama Hadiza Usman, narrated
how she got to know that her grandson’s eyes had been removed by
ritualists while he was on his way to an evening Islamiyya class. In tears, Malama Hadiza told Daily Trust that she would never forget the incident for the rest of her life.

“I’d given him N5 to buy sweets on his way, on Sunday, January 24. He
left the house with his brother Umar, but on their way they were
intercepted by yet-to-be identified men who took him to an uncompleted
building and gouged his eyes out.” At the hospital, little Abubakar was
telling those around him to open his eyes to enable him see his mother
and grandmother. “Open my eyes, I want to see Mama. Mama, where are you?
Where’s Grandma?” he kept wailing.