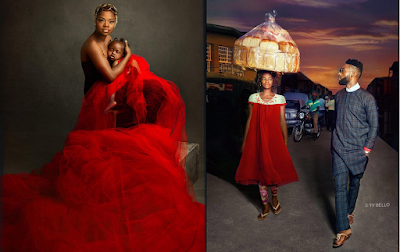 God recently used TY Bello to change the story of a certain bread hawker, Jumoke…and the action has spurred out different reactions, some positive and negative ones.
Well, comedian Alibaba has this to say about the whole thing:

I have read, seen and heard so many takes on this #olajumokeorisaguna #tybellophotography happenstance. The thing that still amazes me is the fact that several people, failed to see the undercurrents that make this story insightful. First, it is that she was hawking.

There was no shame. She was earning a living. Beautiful as she is, or as we have now been made to see, she did not sit at home and wait for opportunities to come meet her. Like Ruth, she went to the field. There are other things she could sell, which is the excuse that many in her position would have given for going into one of the oldest profession.

She didn’t go out all dressed like her condition (in need of help). She was selling bread and still came out presentable. If that picture is anything to go by, she was bold. Not shy. She was not timid. Many of us want our destiny to be discovered and brought to us while we are lying on our beds or sitting on our behinds.

Some days back, I shared that, GOD PROMISED TO BLESS THE WORK OF OUR HANDS. He told the fishermen, cast the net this way, because you have been casting it that way and had not caught anything. He also, did not bring the fish and bread that he multiplied to feed the multitude. They were brought to him. God has given you life and you are now to make something out of that life. God asked Moses what is that in your hand.

There was a reason it was bread that she was hawking. That was the rod in her hand. Your abilities will make way for you. She could have been home and this photo shoot won’t have captured her. Maybe God would have made the photo shoot happen in the house. Maybe! My point is that if you want God to make you win a lottery, at least buy the lottery ticket. It is your efforts that get rewarded. Not your laziness. Even when opportunity comes, there is still work for you. An advert agency guy heard the voice of the bar man. Those convincing velvety baritone. The Kind that makes you listen to a jingle and yield your ears and eyes to the television commercial. He took him for some auditions. That’s talent meeting opportunity. But the real work will follow seizing that opportunity. Moses’ mother didn’t wait for pharaoh’s daughter