President Goodluck Jonathan has just concluded his media chat with a select number of pressmen. 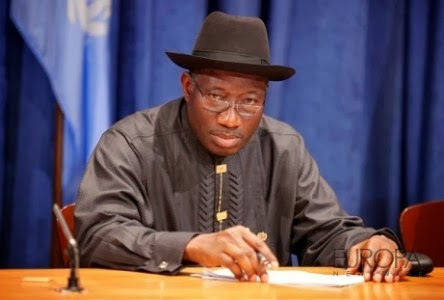 Pres. Jonathan  faced a panel comprising of top media
personalities, Adesuwa Onyenekwe, Deji Badmus, Ibanga Isine and Ibrahim
Sheme, and he addressed issues ranging from Boko Haram, to Election, Chibok girls and more.
See highlights below:
On why he goes to churches and not Mosques “I’m united by different people. I can’t attend ceremonies that I’m not invited to.”


The president sought the understanding of the international community over the
postponed elections. He said the kind of scenarios where elections are
postponed for the sake of perpetuating power is not the case in Nigeria.

The president was asked why he thinks the war against Boko Haram can be won in
six weeks even though the war had raged for six years. The president said he
has just acquired new weapons, and
gotten support of neigbhouring countries to fight Boko Haram.
He mentioned that Chad waited for African Union approval, which they recently
got too. He also mentioned that the issue of security is beyond Boko Haram. The
president said it runs into dangerous signals of youth restiveness. In the next
four weeks Nigerians will see the difference in the security intervention in
the North, he said.

The president is asked where he bought arms for the coming onslaught on Boko
Haram. He said they managed to get from other sources other than America.


The president said he wished Jega was seated by his side to answer the
question.
I wish Jega were here, I could have asked him to answer
whether I have confidence in him Yes those who called for his sack may be close
to me, but they express their own opinion. More than 80 per cent of those who
sponsor messages on our behalf we don’t even know them. People use the
reschedule of election to misinform Nigerians.
I have never thought about removing INEC Chairman, though I have the constitutional
power to do so.”
GEJ blamed his supporters for rumours about Jega’s
resignation. “I have not told anybody that I will remove Jega,” he
said. He explained that if there are obvious reasons to remove Jega, he would
rely on “constitutional” provisions that gives him powers to sack
whoever he appoints.
”The level of misinformation, especially from young people
is high. Attempting to attack the president is treasonable offence.The
president is protected by soldiers, not just the police. People get carried
away and make some provocative statements.
Those who pelted my convoy during my campaigns in the Northern part of the
country were ignorant. If INEC conducts the election poorly, it will be on my
head.”

The president explained that “some people” get carried away by the
political play and exude these violence. He blamed aides and associates of key
political actors for the hate speeches and political violence. He did not
categorically condemn the hate speeches or war threats or politically-motivated
violence.
“We will make sure things are done so that nobody goes to war,” the
president said when he pressed for categorical stance on the war threats by
ex-militants should he lose the elections. He argues journalists have
responsibility to ensure the unity of the country.

GEJ responded by saying he does not receive invitations from Muslims like from
the churches.

The presidents said the new dates are sacrosanct and a new president would be
sworn in by May 29. He argued that the goal is not to totally eliminate Boko
Haram but to make adequate security arrangement for the election.

Questioning moves to the issue of the president’s perceived weak support
especially as it relates to the missing Chibok girls. “Just give us some
times,” he said, responding to questions seeking the state of the girls at
the moment. The president is optimistic the girls would be rescued with the new
military collaboration with neighbouring countries. “I believe the story
would be different in a few weeks,” the president said. “We would
recover them alive.”
I believe the story of Chibok Girls will get better in the
next few weeks, but don’t quote me. We are working with our neighbours, we will
comb the whole of that place Partying after abduction? It’s unfortunate that
people play politics with the issue of Chibok girls. It’s not like that
elsewhere. In other countries, political boundaries collapse in the face of
terror attacks, not so in Nigeria.
With regards to his weakened political base, the president
said “in politics, there are only permanent interests.”

He said he made that statement quoting the former Chief Justice of Nigeria,
Dahiru Mustafa, who explained to him that his analysis of corruption cases in
Nigeria showed that most of such cases were theft. He argued that referring to
stealing as corruption minimizes the crime. “Ole (thief in Yoruba) should
be called Ole and given that treatment,” the president said.
“Let us communicate properly. The word corruption, we
have abused it.”
“It is not actually my quotation. I quoted the former Chief Justice,”
as he continues to defend his previous comments on corruption and stealing.
We have convicted more corrupt people than ever. It is just
that Nigerians are confused on what the difference is between stealing and
corruption.

He said the government have not started disbursing the N1 billion loan. With
regards to the .3 million arms money seized in South Africa, he said the money
does not belong to Nigeria, technically. He added that the matter was in court.


“If the elections are conducted and I lose, of course, another
president would be sworn in,” the president said. He argued that Nigeria
is more important than any individual.

He said most of the problem he had in the past is related to perception and not
concrete. He did not really say what he would do differently.

The president responded it was an unfair question. He however mentioned that he
has recieved more criticism that Muhammadu Buhari on social media.

He answered saying he appointed everyone at the management level of INEC.

In his closing remarks, president Jonathan assured Nigerians that elections
would be conducted and a new president sworn in on May 29. He argued that it is
better for INEC to conduct an election everyone would be happy with.

Did you watch the broadcast too?