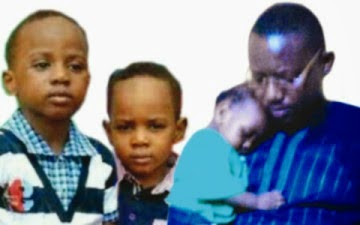 According to the Lagos
Commissioner of Police, the OLX maid, Mary Akinloye who abducted the three
Orekoya kids was arrested last night.

According to their maternal grandfather, Senior Apostle Abraham
Adekunle, the children were found naked inside a bag. The children, who
had been ravaged by mosquitoes, were immediately taken to police
hospital, Ikeja.

According to reports by Vanguard, Mr. Orekoya was seen rocking Aderomola, the youngest child, to sleep with a lullaby: Row, row, row your boat, gently down the stream. While Aderomola was on drip, the other two were playing.

The children described the kidnappers’ hideout as their new home, saying Mary cooked the meal they ate.

Meanwhile, the father
of the Orekoya boys, Leke has disclosed that the abductors were paid a ransom
as against earlier claims by the Lagos state police commissioner that no ransom
was paid. He however failed to disclose the amount which was paid for the release
of their kids they found in a bag at Egbeda, Lagos.
The children have since
received medical attention at the Police College Hospital, Ikeja, where the
Orekoya children were being treated after they were released by their captors.
According to the Punch,
the children’s mother asked if they want to go back to their “new house”, to
which the six-year-old quickly relied “No, it’s a bad place. I don’t want to go
back there.”
Leke Orekoya also
promised to address the press today. He said that, “We want to rest today… However,
I give thanks to the Almighty God for saving my kids and bringing us together
again. This is not by our power. This is a result of the prayers of people for
us. We saw the effect of prayers at every point while we were trying to secure
the release of the children. The children were put in bags. It is not the work
of the SSS, the military or police. It was God and I am grateful to him.”
The father of the
children’s mother, Senior Apostle Abraham Adekunle, told our correspondent that
the kidnappers sent an account number to the family to pay the ransom. He
said,  “For the eight days that the
children were taken away, we did not rest. But yesterday (Tuesday), they called
us and said we should send the money to them. They sent their account number to
us. Immediately they collected the money, they called us and said they had
dropped the children at Egbeda.”
The children’s aunty,
Adesumbo Alabi, said the family was happy that the children were returned hale
and hearty.
She said the family was
able to pay the ransom through the contributions of members of the public and
relatives, who responded to the family’s distress call.
“The incident still
appears like a home video to me. When I came here and saw the situation on
ground, I couldn’t hold back my tears. Even while we were looking for the kids
on Sunday, we did thanksgiving after praying for hours, believing that the
children will be back to us.
“We thank God the
kidnappers asked for money, because there are cases where kidnappers don’t even
ask for money, and the next thing you hear is that their captives are dead. But
these ones asked for money, and the children are back.
She further said that, “Many
people supported us with money. The appeal we made through the Facebook,
television stations, radios, newspapers, were not in vain. But I don’t think
the kidnappers were able to collect all the money they asked for,”
Alabi condemned OLX for
not assisting the family to secure the release of the children.