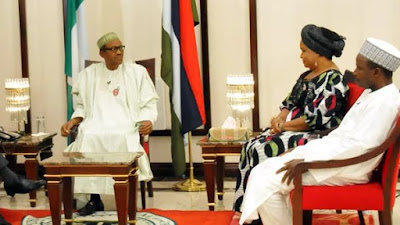 President Buhari had his first presidential media chat since he asumed power, today! In the chat, he  opened up on the true situation with the Chibok girls, the Shi’ite killings, and Corruption.
On why his
promise of releasing the girls has not been kept.

He said, the government
tried to negotiate with people claiming to be Boko Haram leaders,but
they had no credible information to give the government .

I’m working with our neighbors to #BringBackOurGirls.
Although we have no credible info on their locations.We are keeping our
options open. We are prepared to negotiate with B’Haram for the girls””

He also assured that, if any leader of Boko Haram can prove where the
Chibok girls are,the government would negotiate with them without
conditions..He also said the government at the moment has no credible
information on the whereabouts and condition of the girls.. 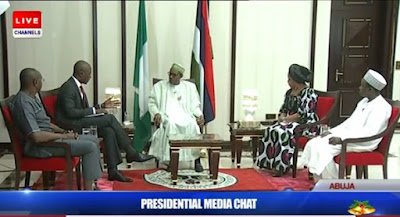 On Corruption he said

We can not name those who return stolen funds as we have to take
documents to court.There are terrible cases of corruption, we can only
appeal to Nigerians to be patient.We have to develop the patience to
prosecute corrupt officials through the courts.As a military leader it
was possible to round people up & jail them for being corrupt, but
not in a democracy.By end of the first quarter of 2016, we will give
Nigerians update on how far our anti-corruption war has gone.”I swore by
the Holy Qran to protect and obey the constitution, no one will be
above the law

On Shi’te killings
He said he can not make any statement until the official report of inquiry is released.

“The president of Iran spoke to me about the Shiite crisis; and I told
him as a govt, we have a system.I am allowing all the investigative
bodies to do their job regarding the Shiite crisis.I have to wait for
the official reports before I can make a statement.How can any group
create a state in another state ? I saw clips of excited teenagers
hitting the chests of generals.No justification for Shi’ite killings but
to be fair to both sides, I have to wait for the outcome of the
inquiry.I expect an inquiry on Shi’ite killings by Kaduna state
government because it happened there

When I say the war has been technically won, I meant their capacity to
carry out conventional attack has weakened.. Hijab will have to be
banned if Boko Haram bombings continues”