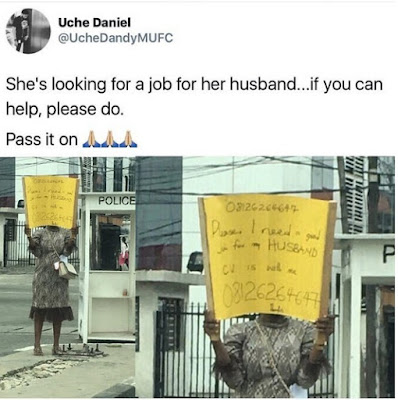 Remember the above photo of a woman looking for a job for her husband which went viral days ago? Well popular philanthropist, KBKOLINE, reached out to him, but was stunned to fined out that the man is NOT willing to accept any job with a monthly salary less than 200,000!

Some of you might have seen this viral picture of wife scouting job for hubby.
I called the number to offer her husband a job. Maybe create a post for him in the foundation,
but I was told, the minimum he will accept per month is N200,000.
Maximum salary I ever offered anyone is a lil lower than the minimum he wants, so NO DEAL!
The man presently works with a bank that pays him 50k and he’s being owed for several months..
He is a graduate of computer science.
My conclusion: He doesn’t need employment that bad! I pray his preferred job falls on him soon.
#kbkfoundation

What do you think KFBers???