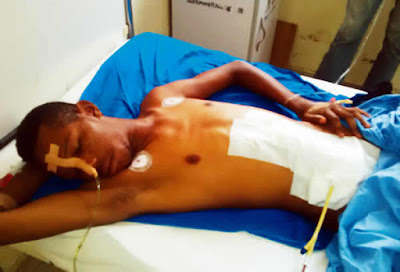 A 200-level university student, John Ekefre, was recently attacked by policemen from the Iponri division, while he was on his way to Church.
These policement tortured him and damaged his intestine.  He had to rushed to the Lagos state teaching hospital after the attack.

He was said to have been operated on to rectify the internal injury and to remove “the blood clots” that blocked his chest as a result of the torture.

His elder sister, Mercy Ekefre, told PUNCH, who visited LASUTH on Tuesday that the family had spent over N200,000 on John’s treatment.

“The doctor said his intestine was ruptured and that he had a blood clot. He had a surgery and we are still awaiting the medical report,” she added.

It was learnt that John, an appendicitis patient who works in a cinema house in Surulere, and four other friends were going for a church programme tagged, The Experience, organised by the House on the Rock at the Tafawa Balewa Square, Lagos Island, after they had closed from work around 11pm on Friday, December 4.

John and Anthony Kenkwo, a graduate of a university in Imo State, had waited for three other colleagues, Michael Peter, Godwin Ekeji and Joy Imoh on the fateful day so that they could go for the programme in a group.

It was said that on getting to the Costain area, the vehicle that the young men boarded ran into gridlock and they decided to alight from the commercial bus.

PUNCH Metro gathered that they were walking by the roadside when they were arrested by the policemen, who accused them of robbery.

John, 22, said he and his friends showed the cops their identity cards, but were rebuffed. He said the policemen beat him to a coma when he demanded to know what their offence was.

“I work at a cinema in Surulere. We were on afternoon duty that fateful Friday. We closed around 11pm and left for TBS to attend a church programme – The Experience 10.

“When we got to Costain, we alighted from the bus we boarded because there was gridlock. About five policemen on patrol stopped us and we told them we were going to the church. They searched our bags, but nothing incriminating was found there. They forced us into their bus. We showed them our identity cards, but they ignored us.

“On our way to the station, I asked them what our offence was and they said we were highway robbers. When we got to the station, they dragged me down, beat me up and one of them hit me in the stomach with the butt of his gun.

“They said I was too inquisitive. The following day, they collected N6,000 from my brother before I was released.”

Kenkwo said a policeman pummelled him when he complained that their arrest was not justified. He said he eventually parted with N5,500 before he was release.

“It was a bitter experience. Every Friday and Saturday, we run late night shows. After the close of work, Ekefre and I waited for three other friends from Apapa so that we would go to the programme in a group. The traffic was hectic that night and we decided to disembark from the bus because the guys with us looked stern.

I also asked the officer who took my statement what I did. But he responded with punches. It was while I was in the cell that I started bleeding from the nose.

They charged me N10,000 for bail. It was after my brother bargained with them that they collected N5,500. They collected N5,000 from Godwin (Ekeji’s) family, but Joy, the only female among us, was released free.”

Peter told PUNCH that the policemen collected N8,000 before he was released.