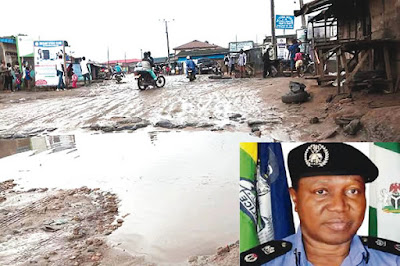 On Monday as armed
robbers shot dead a security guard, identified only as Kayode, in front
of the Ibafo Police Division.
Kayode, a member of the Oodua People’s
Congress, was among residents who responded to the distress call of a
couple abducted by the robbers in their Landcruiser SUV.
The couple, Oluwakunmi Ayodeji, an
engineer, and his pregnant wife, Oyin, were returning from a maternity
centre behind the police station when they were attacked by the gang.
Policemen at the Ibafo division were said to have hurriedly shut the gate to the station and shunned calls for help.
PUNCH Metro learnt that the robbers, after getting to the Lotto end
of the Lagos-Ibadan Expressway, shot Oluwakunmi in the eye region and
abandoned him and his wife on the road.A family friend of the couple,
Bisola Olojede, said she escaped by a whisker.
Olojede explained that she had taken the
couple to the maternity centre where Oyin had a scan and they were
leaving the centre for a hospital in Ikeja when the robbers struck.

She said, “The incident happened around
10pm. The woman, who is my friend, was pregnant and her doctor
recommended that she should do a scan. I was called to take them to a
private maternity centre in Ibafo.
“From the maternity centre, we decided
to go to a hospital in Ikeja. As her husband opened the vehicle doors
with a remote, she entered and sat at the front, while I took my seat at
the back. Her husband had just entered the SUV when a man suddenly
appeared and started dragging the steering with him.
“I alighted from the car and called for
help. I saw a man and I begged him to assist us, but he ignored me. I
never knew he was among the robbers.”

Olojede said she moved away when she saw that the robbers were armed.She
said a few minutes later, they drove away with Oluwakunmi and his wife.
She explained that she ran after the
vehicle and started calling for help, adding that some residents,
including Kayode, joined her in chasing the vehicle.
When the robbers got to the front of the
Ibafo Police Station, they were said to have stopped and fired into the
crowd of pursuers.
Olojede said,

“The bullet hit one of us
and the man died immediately. The police heard the gunshot and rushed
out. I started begging them to help us, saying there was a pregnant
woman in critical condition in the vehicle. There were two of them, a
man and a woman. But they shunned me.
“I called my husband on the telephone
and told him what happened. He said I should call the police and I told
him I was with them but they were not doing anything. When the police
heard that, they quickly shut their gate.”

PUNCH Metro was told that when the Divisional Police Officer was contacted, he ordered the officers to attend to the case.

The policemen were said to have opened their gate and invited Olojede to make statements.
“Later, they asked if there was anybody
that could identify the man that was shot dead and two men came forward
and said he was a member of the OPC and his name was Kayode.
“They then put him in the same van they
were supposed to use to chase the robbers, preparing him for the
mortuary. They started asking me all kinds of irrelevant questions. They
told their DPO on the telephone that they had attended to me,” she
added.

Oluwakunmi’s friend, Jejelaye Gbadamosi, said he had been admitted in an undisclosed hospital.
He said,

“They dropped them around Lotto, and drove off in their jeep. It was a Good Samaritan that assisted them.
“My friend and his wife are in different hospitals. The bullet pierced him around the eye.
“We suspect that the robbers came out
from a brothel close to the maternity area. The place is notorious. The
police did not also do well. They didn’t respond until their DPO called
them.”

A source, who spoke on condition of
anonymity, said despite witnessing the killing, the Ibafo Police
Division did not send signals to surrounding stations.

The Police Public Relations Officer, Ogun State Command, Muyiwa Adejobi,
confirmed the death of the victim.He, however, denied that the police
fled and shut its gate against the residents.
He said, “We have a confirmation that
somebody was shot dead around the police station and the police heard a
woman calling for help; and she was attended to. Nobody shut any gate;
it is not possible. The couple, who were abducted, were rescued in the
Redemption Camp area, and they have regained their freedom. They are
being treated in a clinic