A friend of mine Moji says “My heart
is broken by this story. I can’t imagine what the poor boy must have gone
through. This is why I stay away from dogs particularly big ones, no
matter how friendly I’m told they are. I’m just not interested. May God
restore Omonigho to good health, Amen.” and I totally agree with her. 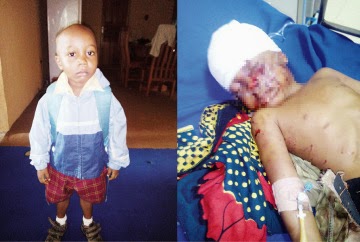 A 4 yr old Omonigho Abraham is currently battling for his life at the Lagos State
University Teaching Hospital, Ikeja,  following an unexpected encounter
with two savage Dogs last Thursday.
Omonigho had his scalp eaten by the two dogs and dragged across Adegboyega Street, Akesan Estate, in the Igando area of Lagos.

The dogs didn’t stop there, they further chewed the skin and exposed the victim’s skull during the attack.

The
dogs allegedly dragged him through his parents’ compound for more than
one hour while policemen and sympathizers watched helplessly at the
entrance of the house for fear of being attacked by the savage dogs. No
fewer than seven policemen from the Igando Police Station reportedly
stood at the gate, confused.

Rea his family members’ and eye witnesses’ account of the incident below:

The immediate elder brother of the victim, seven-year-old Osemudiamen:
“We
were riding a bicycle in the compound when the big dogs ─ Jack and
Gadaffi ─ started barking at us. Later, they moved towards us.
My elder brother and I quickly ran upstairs and locked the door while Omo (Omonigho), who could not run fast, was left behind.
When
he got to the door, he knocked that we should open for him and as we
did, one of the dogs forced his way into the house with him. We all ran
out. Bobby jumped down from upstairs and I also jumped. But Omo could
not jump, so the dog attacked him. The other dog also joined in the
attack and there was nothing we could do.”

A neighbor who witnessed the attack: “The
police came, but said there was nothing they could do. The dogs were
growling as they ate the child alive and that sent fear into everyone.
Nobody could move inside to challenge the dogs. Everybody was just
shouting in confusion and wielding sticks.”

The victim’s mother, Mrs. Helen Abraham:“I was away when it happened but when
I got there, I met a crowd. They asked me not to go inside, but I
refused to listen to them. One of the dogs emerged from the corridor
with blood stains in its mouth. I ran inside. The other dog, on sighting
me, pounced, but I fought back. It later ran away. I called on people
who joined me to take him to a hospital.
“This has been a nightmare I want to wake up from.”
The
victim’s father, Mr. Odia Abraham: “The
doctor at Igando said his condition was critical and we should take him
to LASUTH. When the incident happened, I was away at work.But
when I got home, I saw parts of my son’s scalp on the floor. The dogs
dragged him through the compound for about one and half hours and nobody
moved near them. His face was also affected, but thankfully it did not
get to his eyes. His two brothers, who survived, also got
injured. The seven-year-old who spoke with you has a fracture, which we
are still treating. The other, who is 13 years, has a minor injury. We marked Omo’s fourth year birthday in June. He is a very intelligent
boy and he always tells me he wants to be a soldier because he loves to
protect people. I am hoping this thing will not affect his brain,”
The police were said to have arrested the dogs and their owner, – one Stanley Wesley
A resident said the people living in the house had warned Wesley about his dogs but he refused to listen.

“We
became alarmed when he brought a third dog recently which was more
ferocious and bigger than the others. Whenever he took that dog on a
walk, even adults would be scared.
“People told him to find
a place to keep his giant dogs, but he refused to listen. It was the
new dog that first followed those children into the house.”

Confirming
the arrest, the Police spokesperson, Lagos State Command, DSP Kenneth
Nwosu, said the police were the ones that actually rescued the victim.

“I
can confirm to you that on September 25, at about 5.40pm, dogs
belonging to one Stanley Wesley attacked and harmed a four-year-old boy
and the matter was reported at the Igando Police Division.

“The report from the Divisional Police Officer indicated that the dogs
were being kept to undergo some tests, while their owner had been
arrested. The report that the police did not do anything is not true.”