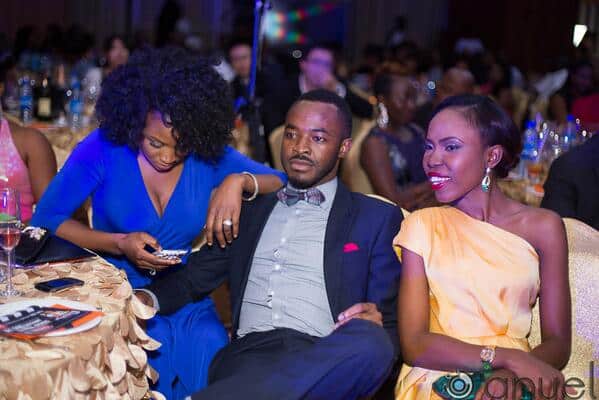 It appears that Popular actor O.C Ukeje and dramatic/theatre artiste Kemi ‘Lala’ Akindoju are currently in a romantic relationship.

NET reports that the pair who has been
seen one too many times in the past few months are madly in love with
each other even though they’ve been keeping it under the wraps.

It is believed that the lovebirds met on the set of Charles Novia‘s award winning comedy flick ‘Alan Poza’, back in 2012 and grew fond of each other since then.
‘They got quite close on the set of the movie. But they’ve been very careful to keep it on the down low’, a source told NET.

In a recent interview with Bellanaija, Kemi had this to say:
In “Alan Poza” there was a kiss. What was it like?
It was really odd and funny, because I had to kiss O.C who is like a brother to me. I didn’t even know about the scene for a while. I was really worried about it, but O.C
helped me pull through. Also, the character was supposed to be shy and
afraid so it played out quite well. I had to do it 3times.

What is your relationship with O.C Ukeje like?
It is great, I met him back in university, My boyfriend at that time introduced me to him and we just clicked.

In the meantime, Ukeje and Lala are currently in Calabar attending the on-going Africa International Film Festival, and yes they are denying that they are dating!

‘We are just friends, there is nothing between us romantically’, Kemi Lala who once dated Red Media’s Chude Jideonwo told NET when contacted and so did OC.
Let’s keep our fingers crossed…you will recall that this was how it started with Tiwa Savage and Tee Billz, lol!
breaking news is oc ukeje dating kemi lala kemi lala akindoju Naija news news now News Today nigeria news OC Ukeje oc ukeje fe OC Ukeje's love life oc ukeje's lover
Previous ArticleWhat you didn’t know about 9ice, his twins and babymama
Next Article All you need to know about Peter Okoye and Lola Omotayo’s November 17 wedding