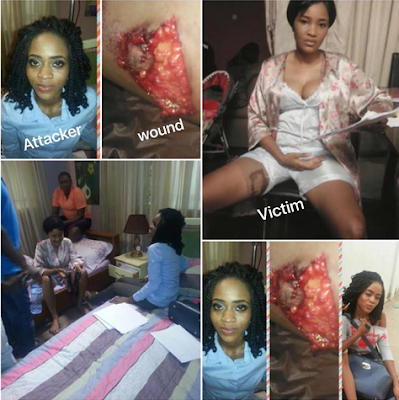 Okay this reportedly happened in Lagos on Friday and according to the victim, Princess Chineke, her fellow colleague gave her these deep wounds!

“She bounced on my lap with her teeth. She hit me in their front before I could hit back, the men came in separated us. She said check your leg see what I did to you? I didn’t feel the pain until I went to pee I saw she ripped my washed pants in the bathroom. I pulled the pyjamas and saw a chunk of my flesh out. Showed it to every one who ran to the room. The management took me to another hotel, then hospital to make sure I was properly treated. Presently shooting in Iyana paja. Name of program: Behind the smile. Happened 11:30pm yesterday. That’s Friday. Her name is Chrystabel Goddy. Still in the hospital with stitches and my wound still bleeding.”

Christabel has now told her own side of the story!

.
“Princess is a colleague whom I met on the set of a production. Despite her malicious and overbearing persona, I still tried to relate with her for the purpose of the project that brought us together. I had complained about her untidy lifestyle and her troubles and even had to leave the room for another room when the original occupant had to leave for his home due to the fact that the hotel is noisy.
.
.
On this day, the alternative room wasn’t available to me and I had to put up with her in the room given to us to share. Prior to eventually sharing the room for the first time, I had told her that most times I get to relax after the day’s job and activities, later at night to respond to calls and text messages and that was just me prompting her out of courtesy and respect. .
.
If one isn’t a bitter person, a phone call shouldn’t offend you so much. I mean especially if you can sleep in a hotel that has so much noise from the bar and she leaves the tv on! I turned it off the day I slept there. So I was on the phone she was still awake laying her head and watching tv before she turned to sleep barely 5mins into her sleep, she wakes up yelling.
.
.
I mean civil communication, if honestly you’re disturbed, is fair enough, but when I didn’t respond, she turned on the music on her phone and to its loudest volume and put the phone right over my head, at this point I was so embarrassed. My friend who had called kept asking if everything was ok as he could hear her voice.
.
.
I had to end the call. The following day I reported the issue. Now, this day after the day’s work, We retired to our hotel and I only went downstairs to ask for help from the reception only for me to return to the room and she had moved to my side of the bed which we had agreed on that I stayed due to my phone calls and work.

.
I asked her to please excuse me that I needed to lay my head after I had waited for her for about 15mins with my excuse for her been that she probably is going through messages she missed earlier unknown to me she’d had a fight upcoming. She responded bluntly saying that she’s not moving from her spot. .
.
That it was hers before she gave it to me and I said exactly so it’s no longer yours if you’re not just a troublemaker. Princess is controlling and rude. She has a deep cut under her arm which she said was given to her by her cousin apparently this does tells how much of a problematic and incorrigible person she is. .
.
I have helped her to treat that deep cut and the production team bought her meds too. On her response, I called the production manager to explain again that she’s about to start again. When I dropped the phone, she started raining abuses on me and my family. .
.
She abused my dad at which point I lost control, because I lost my dad only just recently and the wound is still fresh in my heart. I held her mouth to cover it and make her shut up. She attacked me..scratching my face, neck and tearing the shirt I had on. .
.
She bit me on both hands and used her teeth to cut my gold bracelet. Upon this a senior colleague came in and separated us but when asked what happened she wouldn’t explain without trying to make it juicy and insulting my family. I hold family dearly.

.
I am a private person and I respect people’s families too. She inflicted more injuries on me she pulled my natural hair a wig or weave. Her bites on me are here. Its unfortunate that she’s looking for sympathy in trying to tarnish my name.
.
.
The injury she sustained was out of defence and I have since apologized. An apology which she refused to acknowledge. Regardless of the what had transpired, I still took the pain to apologise to her but apparently she’s unforgiven and vengeful. .
.
My only vengeance is this piece because God knows how to protect his own and I know that she intend to shame me but it’d turn around for my fame. I won’t be angry over the lesbian accusation. A clean heart fears none. I have never kissed a girl in my life. I would never think of going to blackmail an individual. Several folks have hurt me but life goes on. .
.
My consolation is that I’ve been on a few sets and there are folks who can attest to my conduct. However, I forgive her for this and I hold no grudge. I have apologised for the wound because I should have stayed in control and not get furious which is my first but we’re humans and we all have our most stretched points.
.