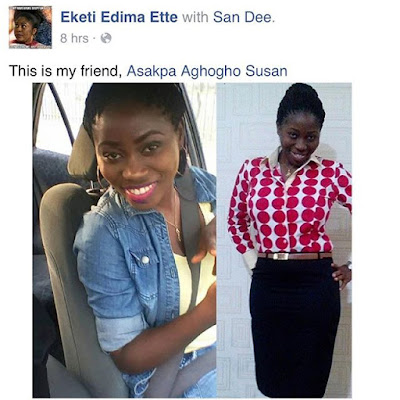 Last night, we brought you photos of one Susan Asakpa, a graduate accountant turned female cab driver in
Abuja (HERE).
Well, Susan has now revealed what inspired her into starting the cab business.

It
all started when Suzan Asakpa’s employer revealed the plan to slash her
monthly salary from N80, 000 to N70, 000. ‘That was my wake-up call,’
she narrated, after all she was already getting bored with the job.

She had worked for three years as a manager in a hotel in Abuja and
felt she deserved an upgrade. But it wasn’t coming. To make this worse,
came that revelation of a salary slash. At that moment Asakpe decided
she needed to be her own boss and prayed for a business idea.

When she got on the phone to her father in Lagos, they talked about what she wanted to do. He was
excited
when he learnt she wanted to drive a cab herself. It was not long
before he gave her a call from Cotonou and asked her whether she would
prefer a manual or automatic. He had actually taken a loan for that.

When the car was sent to Abuja, it was already serviced and everything
had cost N720, 000. ‘But I am going to pay him back,’ Asakpe revealed,
adding that she had already got N500, 000 so far.
So by October, 2015, Asakpe was already in business, but not before some preliminaries.

Before the vehicle was sent to Abuja, she had asked around and knew
what she needed to do. So when the time came she took it for a paint
job. Initially, she had not wanted to paint it in the traditional taxi
colours, but was advised by a taxi driver to do so because it’s the law.
Asakpe had complained to him that painted taxis were not allowed to
enter some places, but he insisted that at least they still get access
into most. 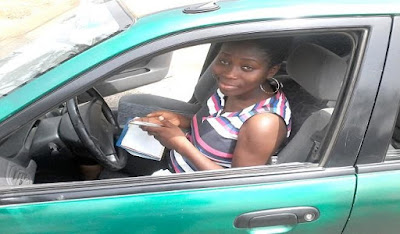 ‘I later noticed that the rooftop of my cab was
painted orange, which meant Painted Abuja taxi (PHC) while others blue,
and some green with white stripes connoting their various companies,’
she revealed, adding that where she registered as a taxi driver, she was
asked by several people whether she was actually going to drive it
herself.

‘They were nice to me and I even got a pass twice and
didn’t have to pay for the monthly sticker. All I had to do was show the
note from their chairman and the boys on the road let me go,’ Asakpe
said. She understood it was their way of encouraging her.

So
far the experience has been interesting for Asakpe. Every day she gets
to meet new people. Virtually everyone that enters her cab wants to
engage her in a discussion. How did you come about this job? Why are you
doing this job? And she enjoys responding to these questions because
how she started-off is a story to tell.

But amidst the
excitement sometimes comes challenges, particularly when her car sits at
the mechanic’s and there’s no way she can work and it continues to gulp
money for a couple of days.
Again, while most of the people around
her are supportive, some discourage Asakpe. ‘I will get you a job,’ and
‘you shouldn’t be doing this’. But Asakpe only smiles.

Asakpe
is presently studying to be a chartered accountant and plans to get more
cars and empower women interested in the business. ‘There’s a lady
already who is interested and keeps asking me to get a car for her,’ she
intimated. So Asakpe wants to run a transport company that is strictly
female in the future. She has realised that there’s no job that’s
strictly for men, after all, there are men who own restaurants, cook,
and make women’s hair.

‘Funny enough, men are supportive and
are my biggest fans,’ she said, adding that she discovered it’s untrue
that men don’t like independent women as some women claim. ‘I get more
suitors now than i got when i was a hotel manager.’

Asakpe’s
typical day as a hotel manager involved resuming work at 7:30 in the
morning, particularly when she was studying for a particular
examination. ‘Those days i have to work for 24 hours, which it means i
work from that time of the morning to 12 midnight and then i sleep there
in the premises and resume the next day at same time,’ she said.

Now her work schedule has changed and is more flexible. She drives out
at 7:30 am and scouts around for workers, ‘because that’s the peak
period, till 10am or 11am.’

When Asakpe started, she parks her
car and sleeps off at noon, but soon discovered she could still make
more money after a single experience. Overtime she has made friends with
some of her customers and takes a break at their place of work.
Ideally, her closing time is 5pm, but when some of her major customers
are in town, she works late.

‘I had a customer recently and
worked till 9pm,’ she revealed, adding that most times such jobs require
her to drive them to a meeting and park while they are inside. So in
this case she charges by the hour. Most times because they are her
customers it fluctuates between N1,000 and N1,500. She thinks this is
fair because she waits and her fuel is not used-up. And staying in a
meeting for five hours by any customer automatically earns her N5000.

So Asakpe makes about N100, 000 in a month, with 80, 000 being her
profit. A graduate of Accounting from the University of Nigeria, Enugu,
she keeps her records clean and knows what she earns on a daily basis.