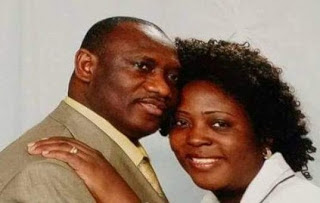 49-year-old Muhammadu Igomigoh, a Nigerian who worked as a security
guard in the US, shot his Nigerian girlfriend, 44-year-old Nnenna
Ogbonna, a licensed nurse and then killed himself during an argument at
their home in Middle River, Baltimore USA on Tuesday February 16th.

According to police report, Igomigoh and Nnenna had two children but no longer lived together.

Igomigoh lived in the 300 block of Shagbark Road while Nnenna lived in
the 700 block of Northrup Lane, where he went to meet her and the
shooting happened.

Detectives found that he visited her home on the day of the incident and the two had argued over finances. ‎

Igomigoh, who had a licensed gun as a guard, shot his girlfriend and then turned the gun on himself.