This Nigerian bride, Lola Akindele Busari has given us a reason why ladies should reserve their virginity till their wedding nights. She shared her inspiring story with Bellanaija and we decided to share it here too.

It wasn’t all easy…..her first three boyfriends left her because they were not ready to accept her ‘TeamVTillWN” principle….when she turned 26 however, she cried to God……..it’s quite a long story of waiting on God and how faithful God is…she further revealed how difficult it was, letting her husband come into her soul, the first time, on their wedding night…and more…enjoy the long but eye-opening piece below: 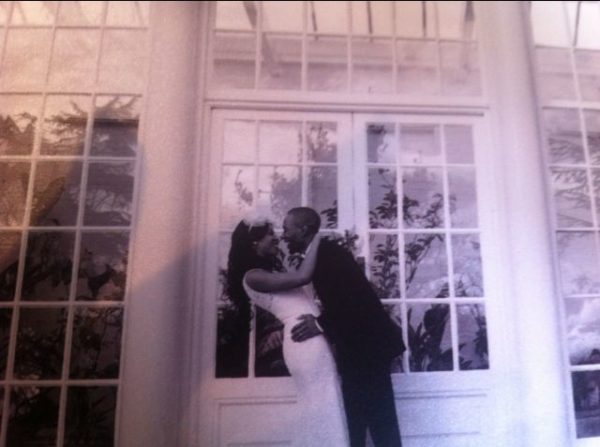 Praise God, like a dream, everything just calmed down, seemed more
relaxed and it happened. Surprisingly, during the honeymoon, my body
discovered a new found flexibility that had never existed before! It was
going into positions that I hadn’t even thought it could do. My husband
is a rather reserved man in public, a symbol of integrity even – but in
the privacy of our bedroom (or whichever room it happens to take place
in even)… there are no reservations!
He sure does know how to handle his
business! And now everything is plain sailing! I call him the captain of
my ship and will often send him a message when he’s at work saying “Oi! Oi! Sailor!”
because he knows how to navigate this vessel towards reaching the
best…well…I’ll just say it: Orgasms out there – whether the tide be low
or high!
On Babies
And of course with love – making comes babies! Another one of the main
topics that arise within the first year of marriage. I can’t even count
the number of times people have asked me when I will be ready for the
children to come. Having been born and raised in London my whole life,
I’m accustomed to being naturally “rather-reserved” as they say the
English are. Thus I don’t take too kindly to the numerous lovely, but on
occasion, overbearing Nigerian aunties who feel that it’s ok to grab
hold of me and pat my stomach every time they see me saying: “Ah! Ah!
When are the babies coming now???” Erm… when we as a couple have decided
we are ready for that thank you very much! And of course… In God’s own
time.
There’s also the matter to consider when
you are expecting to be pregnant and it doesn’t seem to be happening
for whatever reason. Again, I believe that nothing is impossible with
God and being at peace with His timing and decisions can be a source of
comfort to hold on to in the midst of an incredibly heart breaking or
testing time.
On Debt/Finances for Newlyweds
They say once the wedding’s over, your honeymoon has come and gone and
the stories about the Hen Night, Bridal Shower and Traditional
Engagement that all preceded the big day…have fizzled out like stale
champagne…you’re left with: A gaping big hole of debt…The reality of
what it really means to be stuck with each other for the rest of your
lives…
AND…For
those who were virgins before the wedding night…There’s the
excruciating process of trying to overcome the pain of having sex for
the first time and establishing a fulfilling sex life with your husband.
The first year of marriage can be one of the most challenging and
testing years of all – and statistics show that the rate of divorce
spikes within the second year of marriage, seeing as within the UK,
divorce proceedings are not allowed during the first 12 months of being
married.
Well I for one am so grateful to God
because He’s blessed my family and my husband’s family in such a way
that debt and money issues regarding the wedding was not even in the
picture for us… so smooth sailing on that front. Thankfully, a
combination of the upbringing we have had, the teachings we receive from
the pulpit and relevant books/seminars on financial integrity have
enabled us to be sensible when it comes to the subject of money. And
this is extremely key, seeing as approximately 65% of marriages end in
divorce because of money issues. We’ve always had financial goals and
aspirations but over this past year, we’ve been encouraged to put these
ideas to paper and to plan out the next ten years of our lives – which
is a great help.
Travelling With Him
Going on holiday and having alone time away from it all has also been a
wonderful and interesting experience. I had never travelled abroad with
him whilst we were dating so for me, holidays had always either been
with my family or with my girlfriends. Since the wedding, we’ve
travelled to The Dominican Republic (for our honeymoon), Portugal, Dubai
(Got stuck in Qatar lol) and now Paris…the City of Love to celebrate
our first wedding anniversary. We’ve also travelled away to some
countryside locations in England and it’s always interesting discovering
new parts of the world together. The best thing is being on holiday
with not just your man…but your HUSBAND! Whenever there’s a guy staring
at you on the beach or trying to approach you at the bar…just flash your
ring at them! It works like a charm…well…most of the time. Either way,
it’s a great feeling being away from it all and being away from the
normalcy of life, just having a break, like a Time- Out session
together, to recuperate before hitting the grind again. 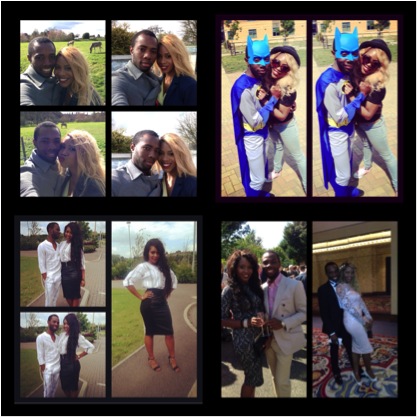 (Clockwise)
Birthday getaway to English countryside; Church family fun day to raise
money for an orphanage; Wedding in Newcastle; Wedding in Dubai; Typical
Sunday after church
Alongside that however, I’ve also learnt
to treasure the everyday, even mundane moments with my husband. As
great as it is chilling with our friends and going out to dinner
parties, events, visiting people etc…sometimes, I just long for those
moments when we’re both curled up in the living room of our apartment ,
the balcony door left open, letting in that crisp, cool river breeze, as
we’re wrapped up in a blanket on the floor (despite having a sofa
suite), with a big old bowl of popcorn (me), suya (him) and Supermalt
(both of us) or tomato juice (most DEFINITELY only him), watching one of
our favourite shows (Suits, The Good Wife, Breaking Bad, Orange Is The
New Black, 24, Scandal, Downton Abbey etc) hooked up from his laptop,
via that oh so precious HDMI cable – and it’s just the two of us in our
little haven of home.
On Home
Speaking of home, this past year has been a true revelation of what Home
actually is. When I was younger, I was accustomed to the popular
phrase: ‘Home is where the heart is.’ I simply took this to mean that
home is a special place -which is some-what accurate. However, my first
year of marriage has taught me that there’s an even deeper sense to the
phrase. It’s easy to find or be found by a guy, fall in love, have a
lavish wedding and live the rest of your lives together. But what kind
of life is it that you’re spending together? There are many married
couples who have spent decades together but the kind of life that
they’ve lived has been an unhappy one. And I believe that the heart of
one’s life is in fact their home. The home they came from, the home
they’re in now or the home they hope to build. (Let me clarify that I
mean Home and not House)And thus, having been a newlywed, I was
determined to make my new Home where my heart is. And when there’s a
King, he must recognise his Queen – which is how my husband treats me
each and every day. In the space of this past year,
Cooking … and looking sexy while doing it.
I’ve been so grateful to my mother for
the home training she instilled in her children when we were growing up
(At the time, I thought it was an abomination that she was making me
cook soup and okra at the age of 10 – but I sure do appreciate it now!)
Taking care of my home is something I take great pride in. It can be
annoying and stressful with cooking and cleaning everyday – no doubt…but
it keeps a happy home and there’s pure joy in seeing your husband’s
face when he comes home from work and you know that both of your hearts
are happy in the home you’ve built.
I’ve learnt that it also helps to wear
something nice and sexy when doing the cooking and cleaning – or nothing
at all with just an apron on can suffice – you’ll find that the food
tastes – oh just that bit sweeter! The whole house seems to be just that
bit more sparkly and clean …and it won’t just be your excellent
culinary skills that have kept him very… how do I put this? That’s right
– Satisfied!
On Prayer
And finally…perhaps the most important thing I’ve learnt in my first
year of marriage is something that I’ve always known , except now that
Two have become One, the meaning of it resonates on a much deeper level.
It is the power and importance of Prayer.
We have a Couples’ Devotion Bible, which
is really great, as it helps us to plan our weekly Bible study around
the theme of our marriage and everything else more or less stems from
there. We also have Holy Communion together once a week at home. The
assistant Pastor at our church once mentioned how it doesn’t have to be
limited to once a month in a church service or every week at Mass. Why
not bring it into your home? 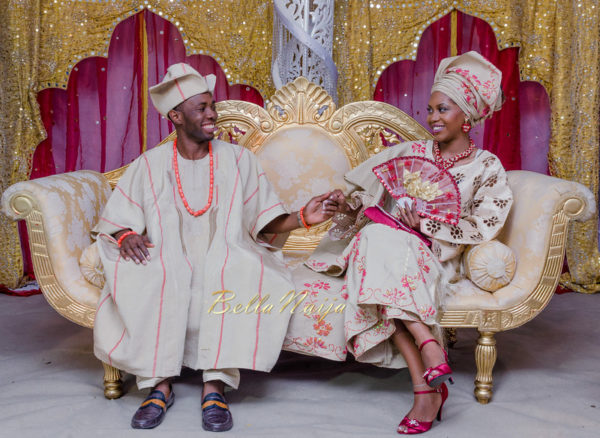 At my bridal shower, amongst some very…shall I say… Stimulating gifts,
one of my very close friends also gave me something to stimulate my
prayer life as a married woman. It’s a book called “The Power of a
Praying Wife”, by Stormie Omartin. It’s an incredible book and has truly
helped me when it comes to knowing exactly what aspects of my husband’s
life to pray for… from praying for his work, to his finances, to his
integrity, to his faith…and everything else in between really. Even how
to handle arguments, and falling out with each other would be covered by
prayer.
We Never Argue
Fortunately, my husband and I don’t really argue. In the past four years
that we’ve been together, we’ve only ever had one major argument thank
God. It sounds strange but it’s the truth. And it’s not just because we
get along so well like Jack and Jill…it’s primarily because of prayer.
Looking Ahead
I know that it’s only been the first year and we still have A LOT to
learn as we continue on our journey of life as Man and Wife. As stated
earlier, by no means do I proclaim to be a marriage expert in any shape
or form but I do believe that the first year of marriage can be one of
the hardest for many couples who do not know what to expect or how to
deal with certain situations. I know that God has brought my husband and
I together and I know that He wants to use our marriage to be a
blessing to the lives of others and to honour and glorify Him and thus
we are happy to have shared our 1st year of marital bliss with you.
Remain blessed,
Faith, Hope and Love,
Mrs Lola Akindele Busari
Photos and story originally posted on BellaNaija.