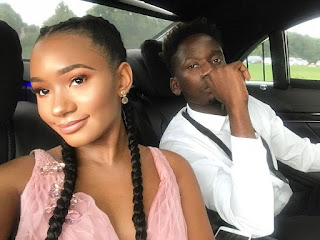 Starboy Record artiste, Oluwatosin Oluwole Ajibade a.k.a Mr. Eazi, has been in the news lately because of his bae billionaie daughter,  Temi Otedola. He recently granted Showtime Celebrity, an interview. See what he said about  his music career , Wizkid and Davido’s beef and relationship with Temi.
Excerpts from the interview
You’re famous for being controversial, why?
Oh am I? I didn’t know I was; but I know I’m a Kubolor (a wanderer or vagabond). A Kubolor is like a gypsy who cares less about anything, that’s who I’m. .
What’s your personal opinion on the ongoing supremacy battle between Wizkid and Davido?
To be honest, I’ve not spoken to either of them about it. For all you know, it might just be the media playing on something or it might just be that they want to drop a song tomorrow and they are just toying with people or they want to go on tour together. At the end of the day these things are not really known until you ask the person. Maybe when next I see Wizkid and I ask him then I’ll call you to give you exclusive inside gist which you’ll pay for, (laughs). .
They say you are a bit proud & snobbish, how true is this?
Mr Eazi is a dirty boy o, I’m just a free guy mehn! If you know me or anyone that knows me knows that I’m a very free kind of person. I literally almost don’t care about anything, that’s why I said I’m a Kubolor, a gypsy. If you know who gypsies are they don’t care about anything, they just drift, that’s who I’m, like I don’t care about cars, I don’t care about houses, I just have these things because of my kids and for my family, but for me as a person I don’t care. Till now even though my manager fights me I can go and buy ‘boli’ (Smoked Plantain) on the street, people see me and rush to take selfies and they don’t mob me because when they see me they know that this is their boy Mr. Eazi, so I’m just free having fun and thanking God for life. .
When did you make your first million?
By August 17, 2016 I was already a millionaire and I thank God because I never expected it.
.
What’s the true story between you and Femi Otedola’s daughter, Temi Otedola?
There is this saying that goes thus “Leave matter for Matthias”, except you tell me right now that your name is Matthias, unfortunately that’s not your name.