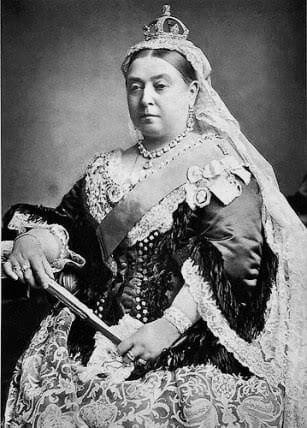 Sarah Forbes Bonetta was originally born ‘Aina’ in 1843 to Egbado parents of the Yoruba ethnic group.

Her father was the high chief of Oke-Odan, an Egbado village in western Nigeria, till he was killed in 1848 when King Gezo of Dahomey , one of the notorious slave raiders in the 19th century , raided his village.

Sarah’s parents and siblings whose names are unknown were killed in the raid which turned Sarah, an Egbado princess, into a slave. Many of the villagers captured during the raid were made slaves and sacrificed to the gods of Dahomey but fortunately for Sarah, she was saved by the quick intervention of Captain Frederick E. Forbes , a British naval officer who was on a visit to Dahomey kingdom to persuade King Gezo to abolish slave trade. Captain Frederick E. Forbes persuaded King Gezo to present Sarah (then Aina) as a gift to Queen Victoria, he said: “

She would be a present from the King of the Blacks to the Queen of the Whites. ” King Gezo agreed and thus Sarah’s life was spared and subsequently she was named Sarah, Forbes, the captain’s surname and Bonetta which was the name of his ship (HMS Bonetta).

On the 9th of November, 1850, Captain Frederick Forbes took Sarah to Great Britain to meet Queen Victoria at Windsor castle. The Queen admired Sarah’s intelligence and ability to learn quickly. Even Captain Frederick wrote: “ She is a perfect genius; she now speaks English well, and has great talent for music… She is far in advance of any white child of her age in aptness of learning, and strength of mind and affection…” Shortly after, Captain Frederick Forbes died and so Sarah was sent to the Schoen family in Palm Cottage, Gillingham. Queen Victoria adopted Sarah as her goddaughter and sponsored her education. Being the Queen’s goddaughter, Sarah had unlimited access to Windsor castle like other members of the royal family. Shortly after Sarah began to live with the Schoen family, she developed a health problem due to the damp weather of Britain. Queen Victoria arranged for her migration to Sierra Leone to continue her education at the Female Institution, a CMS school in Freetown where she excelled in music and her academics. In 1855, Sarah returned to Great Britain.

In January 1862, Sarah Forbes Bonetta, now 19 years old, attended the wedding of the Queen’s eldest child, Princess Royal Victoria, as a guest. Seven months later, she was offered a marriage to Captain James Labulo Davies , a 31-year-old wealthy Yoruba businessman who lives in Britain. Sarah was reluctant to accept the offer due to reasons known to her but she eventually accepted after much persuasion. The wedding took place in August 1862 at the St. Nicholas Church in Brighton, England. It was such an extravagant one; dignitaries from different parts of the world were in attendance.

The new couple moved back to Africa and settled in the town of Badagary in Lagos, Nigeria. Shortly after her marriage, Sarah Forbes Davies had her first daughter and requested for permission from Queen Victoria to name her Victoria. The Queen granted the permission and also adopted baby Victoria as her goddaughter. In 1867, Sarah and her daughter visited the Queen then returned to Lagos where she had two more children named Arthur and Stella. Sarah was diagonised with tuberculosis and later died on August 15, 1880 at the age of 37. She was buried in Funchal, Madiera Island, Portugal. It was such a sad moment for her family. Queen Victoria wrote in her diary, “ Saw poor Victoria Davies, my black godchild, who learnt this morning of the death of her dear mother ”. Queen Victoria took good care of Sarah’s children and maintained close contact with them. Till today, the decendants of James Labulo Davies and Sarah Forbes Bonetta Davies lived in England, Sierra Leone and Lagos, Nigeria.