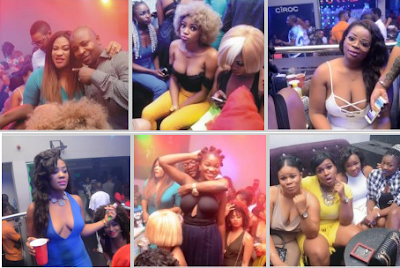 In the photos, many of the ladies were braless, so it was assumed that the party was a ‘braless one’.

Well, MC Oluomo has now reacted to the claims.

Read his reaction in this interview with Encomium magazine


“We all know how big Da Place is, and a lot of people come there,
including prostitutes. They only took the pictures of some prostitutes
and club girls who were not part of the event, who didn’t even get close
to the venue where they organized the party for me, and they posted the
pictures to depict my guests. If you check the pictures very well, you
will agree with me that they’re club girls, not my guests.


To cry it loud, I am a devout muslim which I believe everybody knows.
I pray five times daily, and I have been to Mecca, Saudi Arabia for
both lesser Hajj and full Hajj many times. Not only that, I have also
sent a lot of people to Mecca on pilgrimage, and of course which I do
every year. How, for God’s sake, can I be involved in such immorality?
How can I organize that kind of a party? What do I stand to gain from
such a thing?


“For instance, you as a man, if I invite your wife to such a party, will you allow her to come?

“At this juncture, I believe you also should understand that the
whole thing was fabricated by enemies of progress whose aim was to bring
me down. But my belief is that the house God has built, no one can
demolish it.

“I know I have enemies and there are opposition here and there who
may want to do everything to malign me. That can’t happen because Allah
is solidly behind me