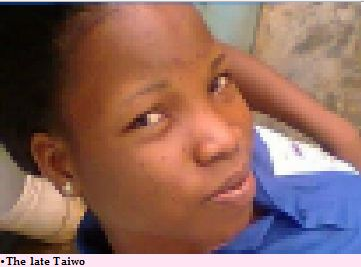 A lady identified as Rachel has killed the wife and children of one
pastor Isaac Shofolabo whom she was having an affair with after setting
his home on fire.

According to neighbors, Rachel who is their tenant, has been dating the
pastor who is in charge of Celestial Church of God, Joy of the Lord
Parish located inside the premises for five years.

The pastor’s wife, Mary Shofolabo, his children Taiwo, 19, and Iredamola
and a relative, Kazeem, 7, died at the General Hospital, Gbagada where
they rushed to for treatment.

According to Nation News, narrating what happened, a neighbour who wants to remain anonymous said;

“It is a terrible thing, very shocking. It happened around 1am. It was
Mama (the late Mrs Shofolabo) that woke up other residents with her
scream. I was in my own room when I
heard her voice and came out. Coming out, I saw fire
on her body and she was shouting that Iya Rachel has burnt everyone in
her house. That she saw someone moving from her house and thought it was
a thief. But when she looked from her window, she saw that it was Iya
Rachel. Since they are not close, she screamed and asked her what she
was doing in her house. She woke up the other children at home and told
them she saw a thief moving round and when they tried to go through the
door, they realised it was locked from the outside. It was when they
were returning to their room that they heard the explosion and people
started running. It was Mama that used her hand to break her window so
that they can all come out from there. When I saw her, fire was on her
body and she was shouting that we should go and help her children inside
the house that Iya Rachel has set fire in her house. I got to the place
and saw Taiwo, Segun, Elijah and one other person.

They were the ones who told me that Kazeem was still inside, at that
time, the fire was very heavy and no one could enter. Neighbours started
trying to put out the fire while some of us rushed them to Isolo
General Hospital but they were rejected. We went to a private hospital
and they said we have to deposit N200,000. Since we didn’t have the
money, we rushed to Gbagada General Hospital. There was no car and so,
Mama and others were put inside tricycle, I stood by the edge of the
tricycle, while Taiwo was carried on a motorcycle. By the time we got to
the hospital, around 2am, Taiwo was swollen. They started treating them
and they were responding. Mama even told the doctor on duty what she
saw and explained everything to him. But later in the day, she passed on
and few minutes after her, Taiwo died too. Their father came back from
vigil around 4am and he saw what has happened. He followed some of the
neighbours to the hospital to see them. The police was contacted that
night. At the trauma and burns section of the Gbagada General, family
members and sympathisers trooped in to see Segun and Elijah, who were
severely burnt.

The surviving siblings, Bunmi, Felix and Kehinde corroborated the claim
by the neighbours saying their mother narrated what  happened in the
presence of the doctor before she died.

Weeping uncontrollably, Bunmi revealed  yesterday was her sister,
Taiwo’s 19th birthday, adding that she and her colleagues at her work
place had planned to celebrate it for her.
Bunmi said:

“Taiwo was very happy because it is the first time her birthday would be
celebrated. At the saloon where she worked, her madam and colleagues
had planned a celebration for her and she even called my cousin around
12am on Saturday telling her of the dress code and her new dance step.
We do not have anyone. Our mummy was our only support and now, she has
been taken from us.

My daddy knew the woman over five years ago when she moved into our
compound with her husband. But her husband left when he discovered that
she was my father’s lover. The woman has been causing problems for my
mother. She was the reason I left the house. At a point, I told my
mother to leave them that she should not put her mind in whatever they
were doing. Yet, the woman was not satisfied. There was anniversary at
the church on November 27 and people heard the woman complaining that my
mother was overdressed and looking beautiful. That so, she could still
look beautiful. They told my mother but she doesn’t take such things
seriously. She didn’t read any meanings to it. Now, the worst has
happened. We are crying for justice. We have reported to the police and
we are begging them to investigate well because we know that something
is not right. Let whoever was responsible for the fire and deaths of my
mother, my sister, brother and Kazeem pay for it. We want justice.”