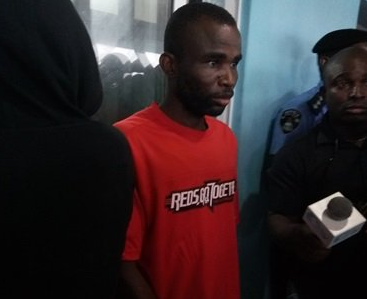 According to report, the suspect suffocated the baby boy before burying him in a shallow grave at a river bank.

The state Commissioner of Police, Asuquo
Amba, who paraded the man and the 19-year-old lady at the command’s
headquarters in Yenagoa, the state capital, said;

”Mr. Moses Otimba, male, 47, impregnated one Joy Matthew, 18, a younger
sister to his wife, Glory. The pregnant Joy was delivered of the baby by
a traditional birth attendant at Amarata, Yenagoa on May 8, 2017. On
May 13, 2017, Moses, Joy and the baby left the birth attendant and went
across Swali bridge where Moses took the baby from her mother (Joy),
went down the river shore, sniffed the baby to death and buried him in a
shallow grave.”

Joy is said to have confessed the crime to her mother three months
after the incident claiming she was hypnotized while Otimba carried out
the hideous crime. Joy’s mother alerted the police after her daughter
confessed to her.

”The police visited the scene of the incident. By the time they got to
the scene, the current of the river had washed off the child’s body. The
suspect, Moses Otimba, has confessed to the crime and Joy Matthew has
also confessed on her alleged involvement in the murder of the baby.
Investigation is ongoing.” he said

Upon interrogation, Otimba said he killed the child because he was scared of what his wife would do if she found out.

”I
killed the baby boy because I was afraid and scared. I did not really
know how to face my wife and my mother-in-law that was why I killed the
baby. I am really sorry. I took the baby to the bush in my community and
closed his nose until he died. When I was carrying out the act, I was
weeping and crying but I had no choice. When I got to the site, he was
five days old then, I closed his nose and within some seconds, he
stopped breathing. After that, I started regretting. The mother of the
baby agreed that we should kill the baby. I told Joy that the situation
was precarious for me and that I did not know how to tell my wife about
the development. On that day, she was carrying the baby. She gladly gave
me the baby to do whatever I wanted to do. My wife was not aware of all
of this. But somehow, I did not know what happened. I learnt the
baby’s mother told her mother who alerted the police and we were
arrested.” he said

The suspects would be arraigned in court soon.