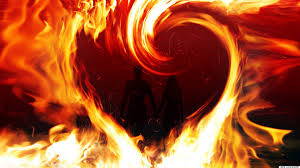 A 28-year-old Togolese, Isah Lamin, who was badly burnt after she was
doused with petrol by her boyfriend, Bakare Kabiru, during an argument,
has died in the hospital, five days after the incident occurred at
Alakia area of Ibadan, Oyo state.

A friend of Kabiru, one Ahmed
Muyideen also got badly burnt as he was caught in the fire while trying
to pull Lamin up from where she was pushed by her lover during the
argument.

Crime Reports learnt that the Togolese, a single mother
of two, started dating Kabiru, a tipper driver sometimes in 2015,
though the suspect was married and had three children from a former
wife.

The lovers reportedly had a misunderstanding on March 13,
2016 at the Tipper Park at Alakia, prompting Kabiru to ask Lamin to go
to her residence where she rented.

After she left, Kabiru asked
Muyideen who is also a driver to accompany him to a place, only for
Muyideen to see that it was Lamin’s residence when they got there.

Crime
Reports further gathered that while going, Muyideen had noticed a keg
of petrol that the suspect held and had jokingly asked that he should be
given the petrol so that he could pour it in his vehicle’s tank. But
Kabiru replied that the petrol was for his generating set to enable him
watch football.

On arrival at Lamin’s house, a fresh argument
broke out between the lovers, resulting in Kabiru slapping the lady. The
slap prompted Lamin to hold on to Kabiru’s knickers, while Muyideen
made efforts to separate them, castigating his friend for beating a
woman.

Smarting from the treatment meted to her by Kabiru, Crime
Reports learnt that Lamin held on to his knickers again. The action was
said to have earned her a hard punch from her boyfriend, resulting in
her falling down beside a stove that a co-tenant was cooking on.

As
Kabiru’s friend attempted to lift the lady, Kabiru allegedly splashed a
quantity of petrol from the keg he brought to the house on Lamin,
igniting both the lady and Muyideen.

Muyideen reportedly rushed
out, attempting to tear his burning clothes off while the suspect and
sympathisers rushed to save Lamin by pouring water on her.

Crime
Reports learnt that Muyideen and Lamin were rushed to a nearby private
hospital but Lamin was rejected, with the advice that she should be
taken to a better equipped hospital because of the degree of the burns
she suffered.

Policemen from Egbeda Division were said to have
arrested Kabiru in the hospital premises, while the case was transferred
to the State Criminal Investigation Department, Iyaganku, Ibadan, for
further investigation on Friday, March 18.

Things however took a
different turn when news filtered into the State CID shortly after the
case was received that Lamin had died.

Muyideen was said to be receiving treatment in the hospital, though his burns also seemed extensive.

Speaking
with Crime Reports on Saturday, Kabiru denied that he deliberately
poured petrol on his girlfriend and, inadvertently, his friend, saying
that the petrol spewed out when he mistakenly stepped on its container
which fell where he put it during the misunderstanding with his
girlfriend.

Giving an insight to what led to the fight between
him and the deceased, Kabiru said: “Lamin was my girlfriend. We started a
relationship in November 2015. She used to hawk a local drink, Kunu,
around and we met in the process.

“In February, she told me that
she would like to get pregnant for me. I replied her that time was not
ripe for such since our relationship was still young and I had yet to
know her relations. I said I was not ready.

She insisted that
that was what she wanted. Because of this disagreement, she changed
towards me and when I noticed this, I reduced my visit to her place.

“On
Saturday, March 12, she came to me at our park and informed me that she
was going to her parents’ place at Monatan area. She added that she
knew I was treating her shabbily because I had already slept with her
and was satisfied with that only. She said she would not take it lying
low.

On Sunday, March 13, I bought petrol for my generator and
mixed it with engine oil. I was in the motor park when she passed by me.

She said was just coming from Monatan. She asked why I greeted her and I
asked whether her statement was because of the argument of the previous
day.

When she got home, she called me again and started raking.
She said I should return her battery phone and DVD with me. It was
during this that my friend, Muyideen came to me. I asked him to follow
me to Lamin’s house. I also carried my keg of petrol with the intention
that I would go home from there. When we got to Lamin’s house, she
started making trouble with me and I slapped her. She held on to me. I
placed the keg I was holding on a bucket.

“An elderly woman tried
to intervene but while on it, Lamin came to hold me again. I pushed her
away, unknown to me that the keg I placed on a bucket fell. My friend
went to help her up and I wanted to storm off in anger. In the process, I
unknowingly stepped on the petrol keg, forcing the stopper off. And
because someone was cooking within the house, the petrol.”