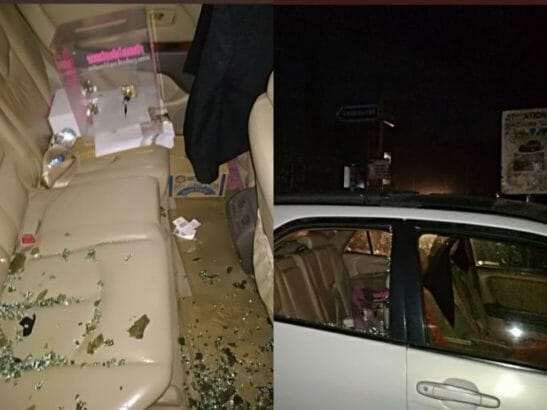 A man has taken to social media to share photos of what happened to his car which he parked at a bank to make use of an ATM in Abuja.

According to the man, just 12 minutes after he parked his vehicle to transact in the bank, his car’s windscreen was broken by some unidentified robbers who made away with his valuables.

FCT is becoming increasingly more dangerous.
12 minutes I spent at @gtbank Area 3 ATM last night was enough time for my car to be burgled and my bag containing @PinkOakTrust laptop, original car papers, tokens and other valuable items were stolen.
Shine Your Eyes!
@PoliceNG

This will not be the first time sad incidents like this occur in or around the bank premises.

Recall that a young man identified as Azeez Morufu, was recently caught while allegedly collecting money from an Automated Teller Machine (ATM) without using naira MasterCard.

It was gathered that the suspect was caught when a passer-by saw him with a huge amount of money at the machine. Morufu who made some confessions after he was caught said he has a code he always input on the ATM to dispense without a card.