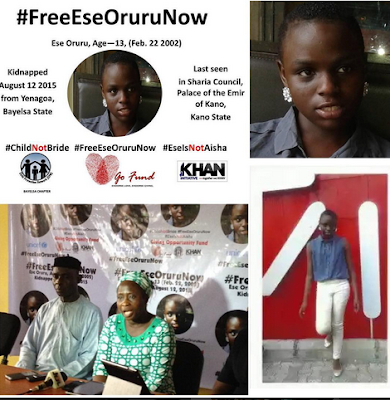 According to Sun Newspaper, tension is mounting in Bayelsa State over the abduction and forced marriage of 13 year-old Ese Rita Oruru by one Yinusa who resides in Kano.
Yinusa who resides in Opolo, Yenagoa, had abducted Ese on August 12 2015 and eloped with her to Kano and has refused to allow her return home. .
.
Her parents who had made several visits to Kano to secure her release, have been unsuccesful as Yinusa’s kinsmen insisted that Ese, who they now refer to as ‘Aisha’, belongs to them as they are ready to pay the necessary bride price. They matter was reported to the Police and the Department of State Security (DSS) and their promise to bring home Ese has remained unfulfilled forcing the parents to take the issue to youth and civil society groups. .
.
In a press conference addressed by Mr. Kizito Andah of the Child Protection Network, he said civil society and youth groups in Bayelsa are ready to stage a protest and press home the demand for the release of Ese from the custody of her abductors. Andah warned against an ethno-religious crisis which the abduction and forceful conversion into Islam could trigger in Bayelsa state.
.
.
In a statement, the group said: “We strongly believe that the said Miss Ese Rita Oruruhas not only has been hypnotized but also recruited as a tool in the hand of an Islamic fanatical group in Kano State. She is only 13-years-old and cannot give informed consent to marriage and is still held hostage. .
.
Mr. and Mrs. Charles Oruru are petty traders who are putting all efforts to meet the needs of their children. Securing her return would not only make history in our strong desire to continually protect our children, but also reemphasize and stamp our indelible position against the acts of these culprits. .
.
We, therefore, call for all to join our voices to prevail on the Kano State Government, the Emir of Kano, Sanusi Lamido Sanusi, to urgently release Miss Ese Rita Oruru, and demand for the prosecution of her abductors under the appropriate law and jurisdiction as it is of urgent national security and public interest.”