He didn’t get a London invitation! Insiders finally reveal why Oba of Lagos publicly snubbed Ooni of Ife 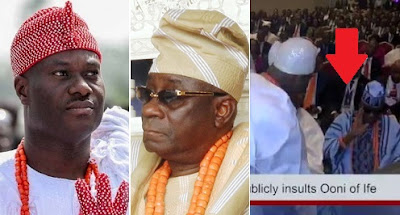 Oba of Lagos, His Royal Majesty Rilwan Akiolu’s public snub of the
Ooni of Ife, Oba Adeyeye Enitan Ogunwusi, on Tuesday, April 25, 2017 (HERE),
was a carry-over from their discussion in March, encomium.ng has revealed.

Insiders aware of the root of the spat traced
it to a call just before the Ooni travelled to London to honour the
invitation of the Commonwealth.
The call made by the Ooni to Oba Akiolu aggravated the older monarch
that he was visibly upset… and told the younger King to cancel the
London trip.

A source told encomium.ng: “Ooni accords the older Yoruba monarchs a
lot of respect and courtesy. He has even visited a number of them in
their palaces since his coronation in December 2015. He wants to build
bridges of understanding.
“Ooni usually informs the Alake of Egbaland, Awujale of Ijebuland and
Oba of Lagos, among others, of his plans. Even when he’s travelling
abroad, he tells them.”

Another insider narrated: “When he was going to London to honour the
invitation of the Commonwealth, he told them. But when he informed Oba
of Lagos about the March trip, he was upset.
“Oba of Lagos flared up during the phone call, and mentioned why he
was not invited. Ooni offered to help to see if Oba of Lagos could be
shortlisted for the trip, but he declined.

“The discussion was heated, and Oba Akiolu insisted that the Ooni
should boycott the London event slated for March 13 and 14. The phone
did not end on a happy note.”

“Ooni was in London, attended the Commonwealth Day celebrations,
presented a speech, laid a wreath and graced many other events during
the trip,” one of those on the trip told Encomium.ng.
“The Bankers’ event of Tuesday, April 25 was the first time both are meeting after the London trip.
“And when Ooni arrived the Lagos event where the Obi of Onitsha
(Nnayelugo Alfred Nnaemeka Achebe) and Oba Rilwan Akiolu (Olowo Eko Omo
Erin j’ogun ola) were already seated, he greeted them respectfully. But
he was snubbed by Oba Akiolu. Even after Obi of Onitsha tried to
intervene, he ignored Ooni.

“When Ooni mounted the podium (at the World Conference of Banking
Institute hosted by Chartered Institute of Bankers), he acknowledged the
Oba of Lagos and Obi of Onitsha.
“However, when the Oba of Lagos was given the microphone, he still.did not recognise Ooni…”
The insiders claimed the 25-second viral video which has sparked
public debate is the fall-out of the phone call before Ooni’s trip to
the United Kingdom.