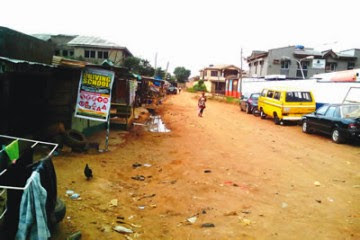 The police in Lagos have arrested an 18-year-old lady, Kafayat Olawale,
for allegedly stabbing to death her boyfriend, Ojo Ijabike, 32.
Punch Newspaper reports that the incident happened on Friday on Olutola Adebayo Street, off Idimu Road, in the Alimosho area of Lagos State.

Ijabike, had attempted to forcefully have carnal knowledge of the
suspect when there was a scuffle between them.

Olawale, was said to have stabbed the
deceased in the heart region, while the 32-year-old victim inflicted
injuries on her.

The landlord of the house, who heard the noise, was said to have broken
the locked door and met the duo lying in a pool of blood.

They were reportedly rushed to a private hospital in the area where Ijabike, an electrician, gave up the ghost.

When Punch visited the Cele Egbe area, where the suspect was
an apprentice in a hairdressing salon, he met her boss, who said
Olawale was tricked into Ijabike’s apartment.

The woman, who did not identify herself, said,

“She is a little girl and I often tried to guide her home whenever it was late in the night. She cannot hurt a fly.
“Ojo (Ijabike) bought her a phone and she brought it to the office that
morning. He called her and said he forgot the charger at home, that she
should come over to pick it.
“It was the charger she went to pick when he locked the door against her and wanted to sleep with her.”

A young man, who claimed to be the “real boyfriend of the suspect”, said the deceased was not in a relationship with Olawale.

The barber, who said they had been dating since 2014, said
he had warned Olawale to stop collecting gifts from the deceased.

“But she kept telling me it was just a normal friendship. I tried my
best to always please her, but I am aware the guy was also giving her
money and gifts and I knew his intention was not pure.
“When he bought her the phone, I frowned at it. I was told it was on
Friday when she was on her way to work that he called her to come over
to his place to take the charger of the phone which he forgot to give
her.
“That was how he wanted to take advantage of her and things went awry,” he said.

On visiting the private hospital, where the duo was rushed to on Modupe Shittu Street, a worker, who spoke on the condition of anonymity, explained that the
deceased was still alive when he was brought to the hospital.

“When they were rushed here, they were both alive. We, however, observed
that the man was stabbed in the heart region. He died soon after. The
girl also sustained injuries. I learnt that it was after the girl
stabbed him that he collected the knife and began stabbing her in
anger,” the worker said.