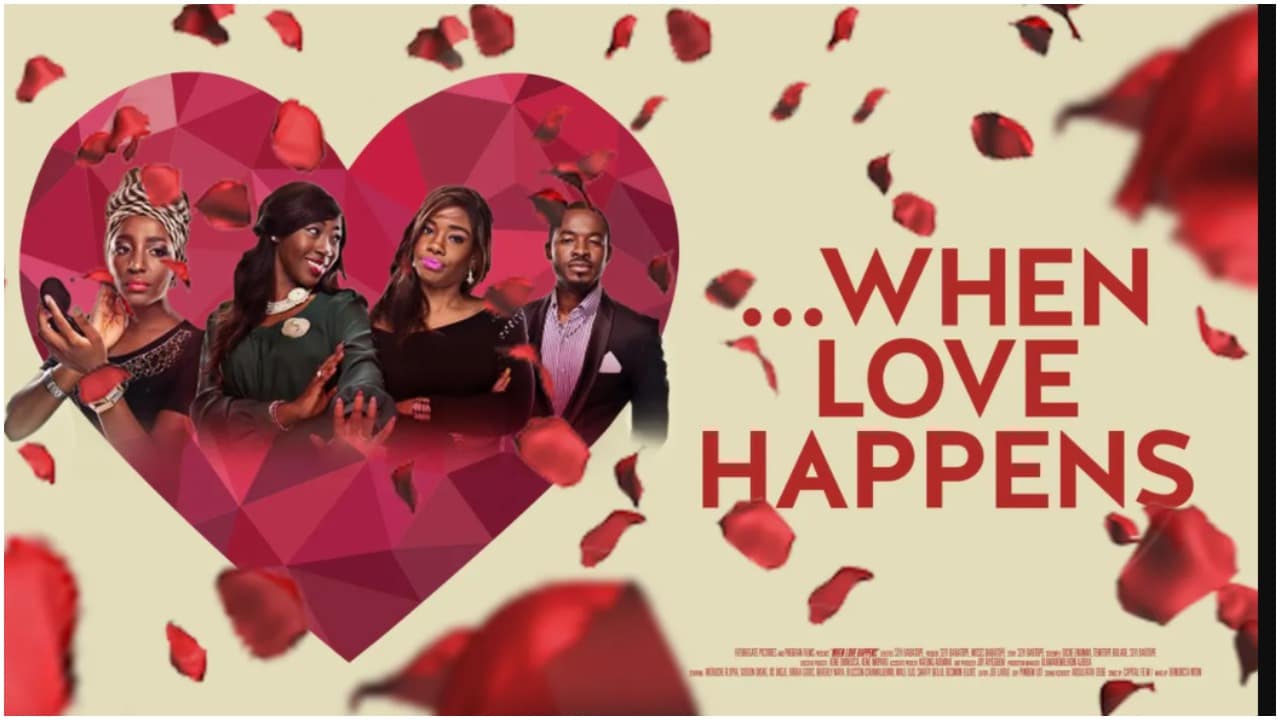 When Love Happens is a 2014 movie produced and directed by Seyi Babatope.

What happens when Love makes an unexpected arrival? When love happens is
a high art and glossy romantic comedy about the lives of 3 twenty
something professionals in a modern technology connected Lagos and the
hilarious and often bizarre adventure in finding romance.

Well, movie critic Wilfred Okiche says the movie is just there, nothing exciting about the movie.

Mo is the stereotypical Nigerian girl (complete with remnants of a
foreign accent), who has just returned home after a spell in the UK
where she earned her university degree. Actually she has been around for
about 4 years now and is quite set up in her dream job, working in the
events planning business.

She is pretty, rail-stick thin, lives with her
parents in a highbrow area of town, drives her own car and enjoys job
satisfaction but in a not-so-surprising twist that is sure to annoy the
socks off any modern day feminist, does not have a man to call her own.
And she is pretty ticked off about it.

All of her friends and competitors are beginning to get hitched, left
right and centre, even those she considers herself better than. As if
marriage was ever about who looks better or who behaves better.
Anyway Mo isn’t happy and she wants everyone to know it. She takes
her frustrations out on her parents (Keppy Ekpeyong-Bassey, Shaffy
Bello) and dumps on her 2 long suffering besties, Tobe (Gideon Okeke)
and Tseju (Oreka Godis).

Played by newcomer, Weruche Opia, Mo is not a particularly likable
heroine. She is selfish, needy, and self-involved and the first act of
the film does not endear her in any way to the audience. However as the
plot drags on, she begins to shake off some of her haughtiness and Opia,
with her easy on the eyes charm and playful spunk, makes her character a
tad more tolerable.

She is hired to plan the wedding of her frenemy, Jennifer (played
with point accuracy by Beverly Naya, who is on her way to being typecast
in these kinds of roles) and to avoid the humiliation that is sure to
come, launches a grand plan to get herself a man, pronto.

Of course one cannot quite play the dating game in the city of Lagos
these days without banking generously on social media. So Mo starts a
vlog where she files her rants for visitors who are drawn to that kind
of thing. She engages on a series of disastrous dates with men she hooks
up with online. And she does meet all types; the randy one, the broke
one, the self-involved one, the boring one, all of them. But she plunges
on bravely because no princess ever finds her true love without kissing
her share of frogs right?

A blast from her past arrives in the form of OC Ukeje, reprising his
Alan Poza shtick (for those who saw Charles Novia’s 2013 turkey), this
time to more sensible effect and his exchanges with Mo make for some of
the most rewarding parts of the movie. Most of the banter is cheesy but
both Ukeje and Opia’s screen chemistry comes off as quite genuine.

The director, Seyi Babatope shows some nice little touches when Ukeje
appears on screen for the first time (he is given a movie star’s
entrance), also with the instant messages that pop out of the screen,
and when he zooms in on the wandering hands of both Opia and Okeke in a
later scene that is meant to convey a nervous tension between the 2
characters. Otherwise his work is subtle, steady and does not draw
attention.

The screenplay by Diche Enunwa, Temitope Bolade (with help from
Babatope) is standard rom com fare. The laughs don’t exactly come hard
and fast. Heavy on dialogue, there are plenty moments where the film
could have just engaged the audience with visuals instead of dialogue.
The pacing is slow and the film drags on for almost 2hours. It is also
quite predictable but this perhaps, has more to do with the genre than
the script itself.

When Godis’ character reminds Mo of the reason she
broke up with Ukeje’s debonair lothario in the first place many years
ago, one is immediately certain what is going to happen next.
It happens soon enough and the writers make it easy for Mo to waltz
into the waiting arms of the one who has always been there all along.
This saccharine sweet ending doesn’t work seamlessly and is about as
refreshing as stale meat but at least, it is crowd pleasing in the
regular, familiar style.

The sets are pretty, all-star cast even prettier and the costumiers
make their presence felt with their delectable mix of corporate suits
and Ankara styling. The movie is all too familiar and trudges along most
of the time, but one can see that everyone is having fun.
Fair enough.