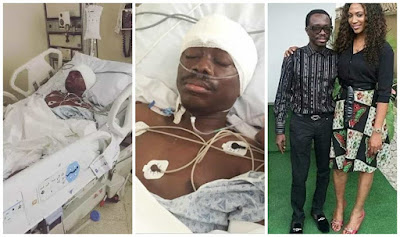 43-year-old ace Nigerian comedian, Julius Agwu, has for the first time
ever, recounted in full detail what he went through during his
terrifying ordeal with brain tumour.

You recall, 2015 & 2016 were tough years for Julius Agwu after it
was discovered that he had three tumors in his brain with one of them
the size of a golf ball. It wasn’t even until after a trip to an
American hospital, that Julius discovered he had the tumours.

Thankfully, with the help of amazing doctors at the Park Plaza Hospital,
Houston, America,  and huge support from his family in 2015, Julius
Agwu had a successful brain surgery. He however suffered a breakdown
from stress while planning his Crack Your Ribs UK Edition show in 2016
and was ordered to rest by his doctors.
In a new interview with Inspaya TV, Julius Agwu opened up about the
ordeal and how he pulled through. Julius also revealed how he began to
suffer memory loss and several seizures shortly after
shooting the TV series The Vendor.

“All i remember was I woke up in the hospital and heard the story of my being in coma. I lost my memory.” he said.

Julius Agwu also opened up on the fact that he almost committed suicide
and was already trying to put things in place for his wife in the worst
case scenario of his demise.

“I started looking for my property documents to give to my wife. One day
when they were not home, I almost committed suicide.” Julius stated in
the interview.

Julius’ wife, Ibiere and his sister Theresa also shared that the
incident got so bad to a point where he stopped moving and was almost
taken to the mortuary.

“So now I am going to be a widow, how do I manage with these children?” Ibiere said.