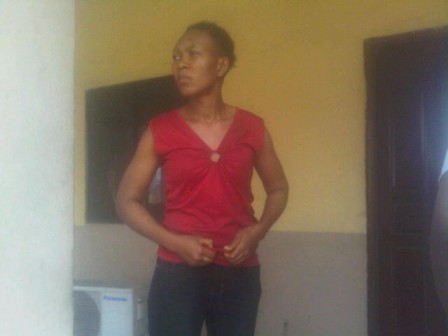 Women wahala! A jilted housewife, Chinwe Ogbachi, 28, has unleashed her
frustration on a policeman’s wife who’s pregnant, Nkechi Onwuzuruike, by
inflicting injury on her face with razor blade in the Ajangbadi area of
Lagos.

The incident happened at their home at Bright road in Ajangbadi on the outskirts of Lagos.

Ogbachi,
a mother of four kids, allegedly slashed Onwuzuruike’s face during a
disagreement Ogbachi had with another neighbor. Ogbachi attacked the
woman after she cautioned her against engaging in a fight with their
neighbour who is also pregnant.

Angered by
Onwuzuruike’s interference, she brought out a razor blade and slashed
her face. The lady started bleeding and was rushed to a Hospital in the
area where she is receiving treatment.


The matter was reported at Ajangbadi police division and Ogbachi was arrested and detained.

Ogbachi
claimed that she did not know what came over her when she did it
because she had been traumatised since her husband left her. She
also said the victim mocks her because she is a single mother and
usually sided with those looking for her trouble in the compound.

Ogbachi
added that she was the only person taking care of the four children
after her husband abandoned them and relocated to the Northern part of
the country.

Despite her story, police charged Ogbachi to court.

When the case came up, she pleaded not guilty. The presiding Magistrate,
Mr T. A. Bolarinwa granted her bail in the sum of N100,000 with two
sureties in like sum.

The court also ordered that the sureties must show evidence of tax payment and means of livelihood.

Ogbachi has been sent to Kirikiri prison, and she will be there until she meets her bail conditions.