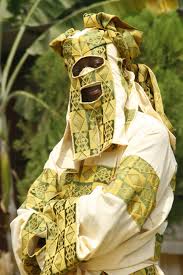 Have you seen Lagbaja’s recent rant against Presidential Special Assistant, Doyin Okupe? Well, the Afrobeat musician who thinks that Doyin Okupe’s statement on Nigeria’s economy not being strong enough to afford new trains is rather insensitive, took to facebook, to lambast him

Did you hear the latest from the clown Doyin Okupe?
Did he really insist that our economy cannot support new trains?
At last …it should be clear to doubting Thomases
That this government has been lying about its achievements
Now, finally, they have unwittingly admitted that their great railway
Is a fraud based on outdated and archaic equipment

His declaration is also clear proof that this government
Has no business remaining in power
They are incurably deceitful… and
They have no idea how to make great things happen
Soon they will lecture us about how Nigeria is too backward
For steady electric power
They do not know how to run a Nation in today’s world
Please… just leave and make space for those who know
Many may be too young to remember that
Senate President David Mark also once insisted
That mobile phones are not meant for everyone
But only for a privileged few
Should we continue to be retrogressed by their lack of vision?
But why does this government lie so blatantly?
It is simply because they believe that YOU are a fool!
They believe that YOU are unenlightened and unexposed
That YOU are unintelligent, daft and do not know any better
It is time to take control of YOUR own life
True we are not America.. but
Algeria has high speed rail
South Africa has high speed rail
Libya is building
Why not Nigeria… the biggest economy in Africa?
Or is “the biggest economy” another lie?
Mumu enough!
That was some piece of HIS mind!
breaking news Election 2015 Lagbaja Lagbaja and Doyin Okupe Naija news news now News Today nigeria news
Previous ArticleOC Ukeje wedding: Why I wore a suit for my ride or die guy – Kemi Lala Akindoju opens up
Next Article Checkout Simi Esiri’s shoutout to mum as she turns plus one today